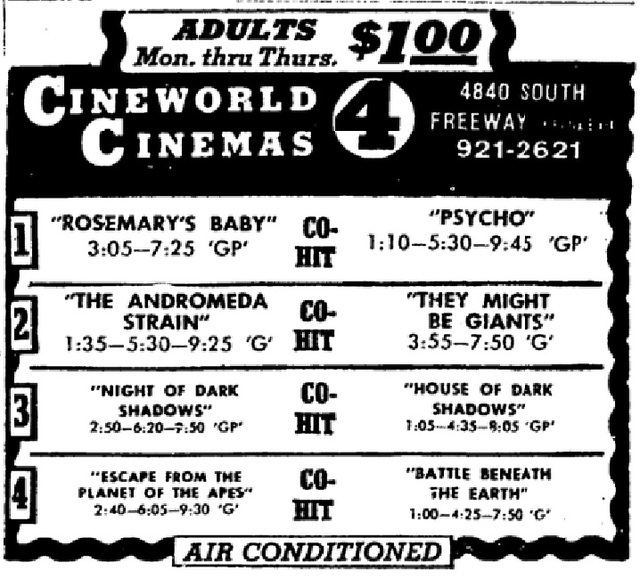 Opened May 27, 1970. Independently run four screen theatre in Fort Worth area. Ran dollar movies in the early-1980’s and closed in early-1986

This theatre has not been demolished. Like the fate of so many theatres, I like to say it has been remodeled out of existence! It is now a Family Dollar store like quite a few multiplexes I have known. And like so many theatres remodeled, there is still some remnant or indication it used to be a theatre. In this case, while the front of the store is glassed in, on the left side of the glass front is a slight brick front where the poster cases (recessed into the brick) have been boarded over. I saw many a movie in the early ‘70’s there including 2001; although the theatres were all rather long and narrow, the psychedelic trip into the monolith at the end was quite a trip!

This was the first multiplex cinema in Fort Worth. It opened on May 27th, 1970. Grand opening ad in the photo section.

Cineworld Corp. of Sioux City, Iowa, decided to build the first of a chain of theaters at this location in Fort Worth with 4 identically-sized 200-seat auditoriums or 800 seats in total. It launched May 27, 1970. The circuit said it had five other theaters in development in Kentucky, Arizona and one in DFW including the Tuscon Cineworld at Monterey Village.

Cineworld closed in 1974. But Ted Conley’s Petite Amusements of Kansas (which became Texas-based T&S Theatres) took over and reopened the location on August 2, 1974. The T & S circuit, so named for Ted and wife, Shirley, sold off the Cineworld and its other locations to Texas Cinema Corporation (which would merge with Cinemark in 1979). But Cineworld was quickly jettisoned from the company’s portfolio so T&S came back to operate the four-screen operation before T&S’s permanent closure on July 10, 1980.

The Cineworld found a new operator in the Boren Theatre Circuit which took on the location with its final ads running to 1986 - likely when it closed. However, the local newspaper still carried it as an active location into February of 1988 - which could well be true.