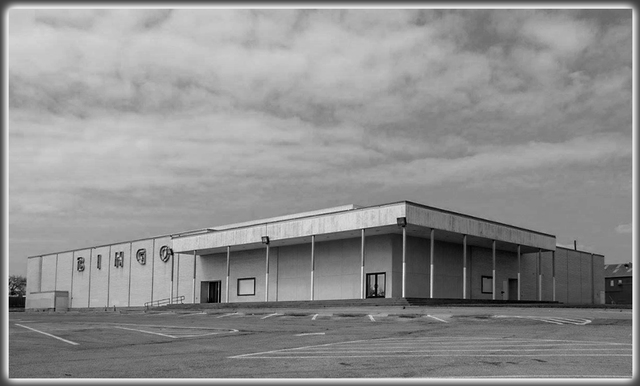 The General Cinema Corp.’s Seminary South Cinema I & II officially opened on Thursday, Christmas Day 1969 with searchlights, a ribbon cutting and the Kennedale High School Band playing tunes. Opening features were “The Sterile Cuckoo” rated M and “Viva Max” rated G. Manager Bill Ellis explained that the theater would always have one family feature and one film for older audiences. The GCC Seminary was the city’s first twin screen indoor theater. It was named for the shopping center announced in June of 1960 when Sears not only decided to build its first retail store within Fort Worth, it created an entire subsidiary called Homart Development to construct shopping centers. The first of which was Seminary South Shopping Center on an 88-acre tract that opened in 1962.

In 1969, General Cinemas Corp. decided the time was right to construct two theaters simultaneously adjoining shopping centers. They were the Seminary South Center I & II in the Homart plaza and the Six Flags Cinema I & II in nearby Arlington, TX, a project that had delays opening in August of 1970. GCC also opened in Homart’s other properties in DFW: inside of Valley View Mall in Dallas, outside of what would eventually be called the Parks Mall in Arlington, outside of the Town East Mall in Mesquite.

The GCC Seminary had 1,600 seats with Cinema I holding 1,031 customers and the smaller Cinema II holding 617 people. The theater had an art gallery, smoking areas, pushback reclining seats and picture window screens. The GCC would expand in the 1970s to three screens as auditorium two was twinned becoming the GCC Seminary South Cinema I, II & III. The Seminary South shopping center struggled due to competition from new enclosed malls in Fort Worth, Arlington, and North Richland Hills. Locals disparagingly referred to the area as “Cemetery South” as the center shed stores and hurt General Cinema’s revenues. But there was hope for General Cinema.

In 1985, Homart finally sold the underachieving shopping center to the Texas Centers Association which spent $25 million to purchase the property and another $25 million to convert the open air shopping center to an enclosed mall designed by Altoon and Porter, architects from California. The architects had a spot for GCC on the second floor right by one of the mall’s main entry points on the East side just up the escalator. The mall project finally opened on September 4th, 1987 as the Town Center Fort Worth with great optimism. Not long thereafter, General Cinema completed work on its new GCC Town Center 8 which opened and the chain closed its exterior Seminary South I, II, III. The location became home to a Bingo parlor and also housed some church functions. It had long stretches of emptiness but was still standing as of 2014.

The theatre outside of what would eventually be called the Parks Mall in Arlington was not built and opened until the ‘80’s and at a distance from the mall. It is used today as an administration building for the Arlington school district.

For the curious, 412 W. Bolt Street, Fort Worth, TX will put you right by the building on the south side of that street.

Back to your old self Rivest.

I spent a lot of my childhood seeing movies like Jaws which I saw probably 60 times at this theater also French Connection II Bad News Bears and I could go on and on and on Ahhh The Enforcer with Clint Eastwood as Dirty Harry!