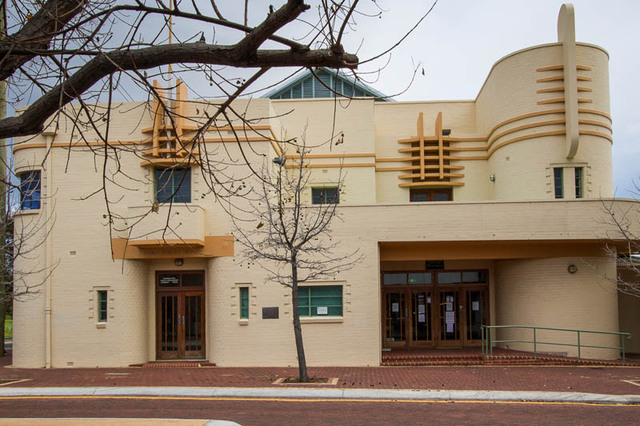 Located in the Mosman Park district of Perth. In 1921 the building was created by the Main Roads Department with silent picture facilities, Council Chambers and offices. It was designed by architect J. Oldham. It served in the latter role for over 40 years until the Council moved to new premises in 1966.

In 1939 it was re-modelled in an Art Deco style by the architectural firm Kreitmeyer & Rowe, who made the hall one of the finest of its type in Western Australia and the seating capacity was given as 650 in 1951. However, the cinema closed in the late-1950’s and later deteriorated.

The derelict building of 1992 was refurbished in 1993 all its Art Deco style splendour by architect Marcus Collins. Managed by MosArts, the building once again thrives as a community centre. Featuring an outdoor cinema, theatre, function room/gallery, dance space, infant health clinic and offices.

The Camelot Outdoor Cinema and Memorial Hall was given Landmark Listed building status in 1999.

After the Council(Town of Mosman Park) moved out in 1965 or 1966, it was used for the Mosman Park Reception Centre(also called Camelot Lodge) until it closed in(80’s or early 90’s?).