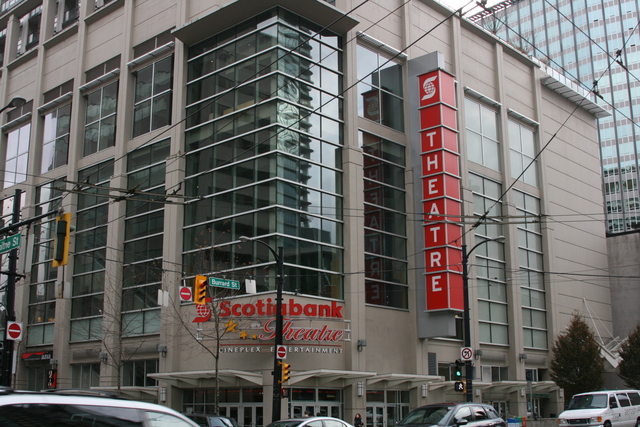 The Famous Players Paramount Vancouver was opened April 29, 2005. Scotiabank Theatre Vancouver opened under this name around 2006.

This is the theater I have gone to most in the past 4-5 years. Like these people said before, I remember years ago, I do not remember when, that this was called the Paramount Theater.

How many levels does this theatre have? How many cinemas per level? I remember the old Capitol 6 and the big one on the main floor, 2 and 3 on the next floor and 4,5 and 6 on the next level. Always thought that was a neat way of distributing all the screens throughout the building.

This theatre and others were originally called PARAMOUNT. What a damn shame that Scotia Bank actually got naming rights to these theatres as part of a marketing ploy. THE ROYAL BANK was Famous Players Canadian Corporation’s bank of choice!!!

This opened on April 29th, 2005. .swf commercial at https://www.youtube.com/watch?v=kvsHEgHHuIU

This is also one of the first Cineplex locations to have TWO Ultra AVX theaters. #1 (formerly 467 seats, now 420) was installed first, then #2 was converted in November of 2013. #2 had the first Dolby Atmos installation in BC.

This opened on April 29th, 2005 as the Famous Players Paramount Vancouver Commercial: 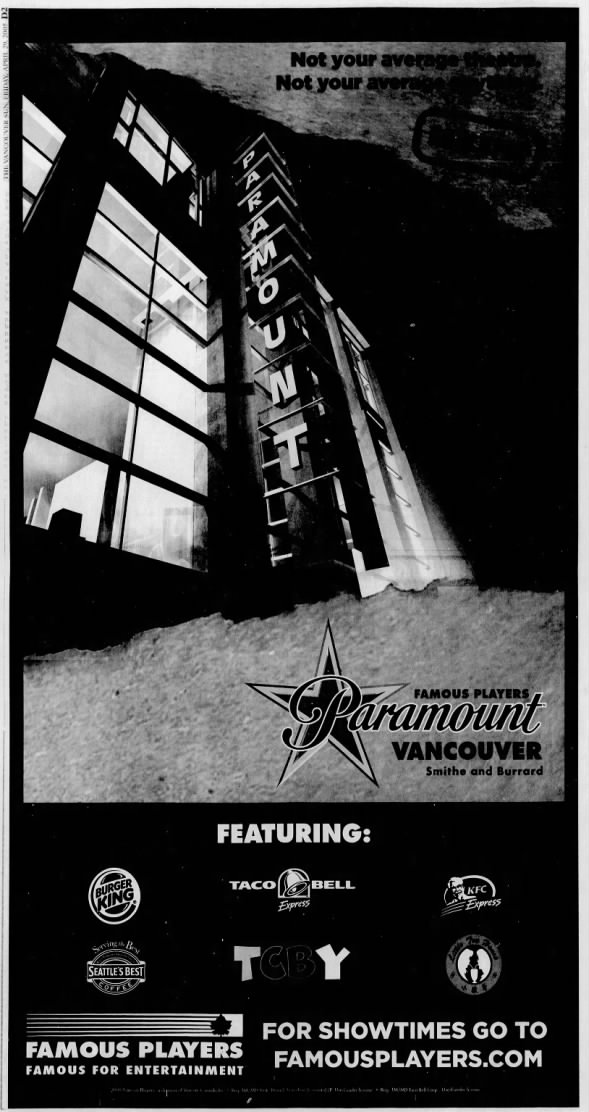 As far as I can tell, this is the only Scotiabank Theatre to NOT have an IMAX. I get that it’s 9 screens, but seriously?

That’s a really good question in regards to the lack of IMAX. When it opened in 2005 the nearby CN IMAX was still open and running a mixture of docs and first run. It closed a few years later, and now the closest location is the fish-eyed OMNIMAX at Telus World of Science, which is still 70mm-film only and limited to hour-long documentaries. So other than that you have to travel out to Silvercity Riverport or Cineplex Cinemas Langley for your IMAX fix.

Scotia Vancouver is also, by FAR, the smallest Famous Players Paramount to be built, and the last theater to open as a Famous Players. It was LONG behind schedule (which was good for movie buffs like myself as it kept the nearby Capitol 6 open for much longer than expected) and it’s in this strange middle ground where the theaters are somewhat cramped, pointing in every direction yet it has a massive main lobby. Seat count is just under 400 for largest #1 (originally 467 which IS one of the larger capacities of FP builds in that era), 350 in #2 (originally 404), a few medium sized theaters at 230 and smaller ones at only 137 seats.

I always get a reminder of how small this Vancouver location is when I attend TIFF and the 14-screen Scotia Toronto is almost twice the size when it comes to seat count! #1 in Toronto alone is 559 seats and there are several more large capacity auditoriums.

I do have some older photos of this location and I’ll be sure to add them to this page shortly.