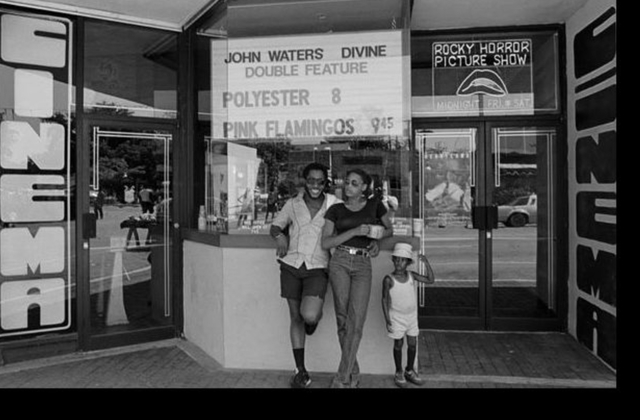 The Fabulous Flying Fendelman Brothers owned Coconut Grove’s once beloved art house. Serving European malted beer and carrot cake, this was the Miami home of "The Rocky Horror Picture Show" along with any number of other cult films and some of the best art foreign language films of the time.

Opened in 1976 when the Fendelmans moved from the Grove Movie around the corner, the Grove started with subrun cult films but quickly developed a loyal following that allowed them to bid for first runs. Playing only films that they liked on exclusive runs payed off well and the cinema lasted until 1989.

Grove Art: Where many a South Florida cinethusiast caught the fever, building up huge carbon footprints from all those drives to the end of I-95. (Not to mention all the great trade-in music stores nearby, woe to the wallet but tremendous fun.)

Forget whether it was the Fendelman Brothers' first or second location that took over from a former post office. Either way, their permanent home may have seated fewer than 100, a space that could still accommodate fine paintings of RHPS characters (one may have been autographed by Richard O'Brien). Dolby Stereo installation coincided with the regional “Das Boot” premiere, leading one reviewer to liken the Grove Art’s tiny confines to that of the film’s submarine.

Its screen may have been ceiling-mounted; I remember it fluttering a little when the air conditioning kicked on.

Recall the time when the Fendelmans got into a bidding war with Nat Chediak (Cinematheque, Arcadia) over “Fitzcarraldo” (the Grove Art won). After Chediak featured “The Gods Must Be Crazy” in the first Miami Film Festival, the regular engagement went to the Grove Art, playing for more than a year.

After AMC made its run for the Gables/Grove alt film market in the late 80s, the Grove Art had a stint as a music video nightclub. An attempt to revive the cinema under a new name (think it was 97 Grand) lasted for bookings of “The Rapture” and an animation festival before calling it a day.

In more recent times, Richard Fendelman filmed the 2005/06 documentary “Don’t Box Me In – A Coconut Grove Story,” chronicling local activism against a proposed Home Depot warehouse. An abridged 10-minute edition can presently be found at You Tube.

I do remember the battle for “Fitzcarraldo” and the hanging screen which made it possible for the Rocky Horror cast to perform below it. I think the Grove Movie was smaller than this one as that may have had the projector inside the auditorium, if I recall correctly. This was located next to a post office so I am not sure if they shared the space.

Credit to Harvey for pointing me to this website below.

The “about” section of the Facebook page of the Coconut Grove Art Cinema Society says:

“Our mission statement is to support the creation and operation of an art cinema in the downtown Coconut Grove Business District reminiscent of the original Fabulous Flying Fendelman Brothers Grove Art Cinema of the 1980’s.”

Click here for the Society’s photo page displaying images of the Grove Art Cinema and some of its printed programs.