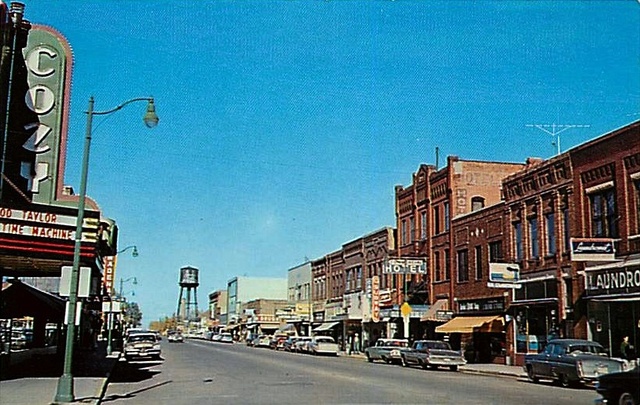 In 1912, the Savoy Theatre opened on Jefferson Street S. inside an existing structure. A year later, its owners decided to build a new and larger Savoy Theatre across the street on a much larger property.

However, when the new theatre opened in 1914, it received a new name, the Cozy Theatre, in a contest, for which a local woman won $5 for her winning name.

On opening day, the eight-reel epic "The Last Days of Pompeii" played at the Cozy Theatre. The theatre also had a stage to accomodate vaudeville acts and concerts.

In 1923, John Quincer purchased the Cozy Theatre, and his family has since continued to run the theatre.

The Cozy Theatre had its grand reopening that fall, with "Rich Man, Poor Girl" starring Robert Young. Ticket prices for adults were a quarter, for children, it was a dime.

In 1986, a video store opened in the Cozy’s lobby, while movies still played in the auditorium. However, ten years later, it closed to make way for a second screen and a larger concession area.

The Cozy Theatre reopened as the Cozy Twin Theatres in 1996 with "Mission Impossible" and "Twister". The Cozy Theatre continues to be both a historic gem as well as a lively entertainment center for the people of Wadena.

Its 1938 marquee, looking very much as it did when it was added, is most definitely one of the Cozy Theatre’s greatest features. The vertical marquee spelling out the theatre’s name in bold letters and its fluid, rolling shapes look even more impressive at night when the cotton-candy pink neon lighting is lit up, giving Jefferson Street S. a festive look.

The owners of the Cozy Theatre recently added a third screen. The theatre played host to the Whiskey Creek Film Festival in September 2007.