A modern basement cinema designed by Casson, Condor and Partners and Richard Seifert, this was a supremely comfortable but very plain cinema. It opened on October 12, 1967 with Julie Andrews in "Thoroughly Modern Millie" which played for almost one year.

The most distinctive item in the well raked stadium style auditorium was the screen, which appeared to float in front of the rear wall. There were no screen curtains and masking wrapped around the edges from behind.

On July 21 1975, it became the ‘permanent home’ of Walt Disney films screening “Lady and the Tramp” - actually this lasted five years before the Odeon returned to normal programming. Screen curtains were added in front of the ‘floating screen’ at this period of time.

Rank then made an attempt to turn it into an art house and it was renamed the Lane Cinema. But less than a year later it closed, only to be taken over by Artificial Eye who renamed it the Lumiere Cinema and who had considerably more success than Rank with art house films.

It closed on 7th June 1997 when the upstairs office block was extensively altered to become a hotel – the auditorium however was included in the scheme as a cinema and conference hall.

However, it never reopened although a full refurbishment was apparently carried out a few years ago. In 2006 it was converted into a Gymbox gymnasium and fitness centre.

I saw many of the Disney presentations here and the the front of the cinema looked great all dressed up with the Disney logo and castle etc. I didn’t realize it was a home to Disney for as long as 5 years. It was a great place to see any movie, as was stated above, the rake and screen were perfect. I saw my first movie in a cinema with ‘subtiles’ at the Lumiere- ‘ThE Big Blue’. London lost a great cinema when this closed. Another being the Odeon Haymarket- what were they thinking?

I rememeber seeing Akira Kurosawa’s Dreams in the late eigties. The inside of the Lumiere felt like it had been designed by Habitat, there was a cool and classy feel about the place. It was probably THE place to see arthouse movies at the time. Shame to lose it. Like the Odeon Haymarket and the Curzon Soho, these 600-700 seat cinemas couldn’t make it in modern London.

I visited this cinema regularly in the late 70’s/early 80’s and this was around the time that the original floating screen was replaced. It wasn’t a case of tabs being fitted in front of the original screen, a stage was built and a normal screen frame with variable side masking was installed (the floating screen had swivelling masking which folding around for wide screen) and a little later the tabs were installed in front of this new set up. I remember a conversation with a Rank engineer who told me that they had installed Dolby Stereo but had taken it out because “it didn’t work” (!).I recall seeing a double bill of The Wild Geese and The Sea Wolves there, with The Wild Geese in excellent 4 track mag and The Sea Wolves (a Dolby Stereo film) in mono!

In 1975 Tom Baker recorded an edition of Disney Time at this cinema, when it was an Odeon

The exterior gives off a strong scent of being designed by Richard Seifert and Partners, with similar “H” shaped pre-cast concrete sections as Centre Point.

This supposition on my part turns out to be correct:

I saw two films here: The Black Hole from Disney in 1980 (and I remember the folding screen masking opening up for Cinemascope) then Parsifal from Hans-Jürgen Syberberg probably in 1982, shown in 1.37 ratio. 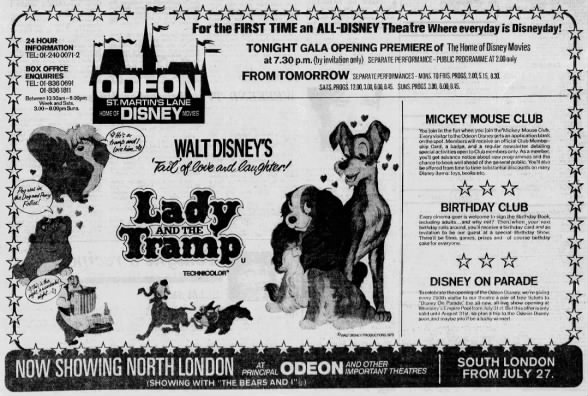 It became the Lumiere Cinema on October 7th, 1982.