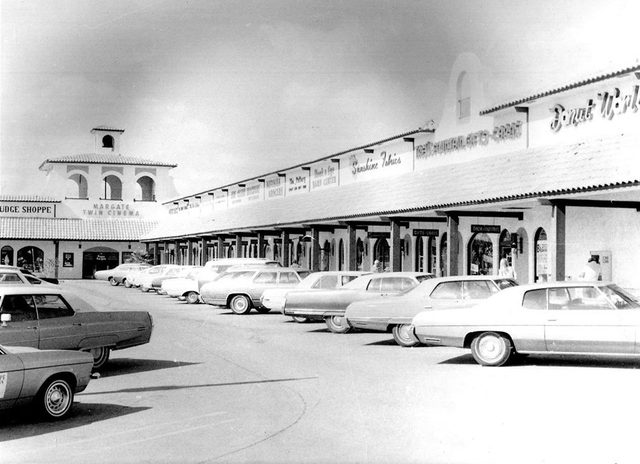 Opened by K-B Theaters on the verge of West Broward’s 1970s population boom, the Margate Twin originally ran first-run features, before a longer tenure as a second-run dollar (or dollar and change) bargain house. Tiny auditorums and screens, but occasional limited release fare (“Hester Street,” “Lies My Father Told Me”) and midnight movies were a draw.

Facing U.S. 441, the Margate Twin was once among numerous choices for local moviegoing, with the Lake Shore Drive In and Movies of Margate to the north, and Value Cinemas to the south. All are gone now. Last time I checked, a furniture store took over the Margate Twin space.

K-B Theatres had many theatres in the Washington D. C. area.

K-B established one other twin theater in the area, Holiday Springs near the Margate/Coral Springs line. A low-price second-run house most of its life, it now hosts live performances as the Stage Door Theatre.

This opened on December 21st, 1973. Grand opening ad in the photo section.

The closing was later then 1993. I moved to Tamarac in 1996 and it was at that time a United Artist theater. It was in operation under and independent operator after that and changed to a $ house. I think it was open at least until the late 90’s or early 2000.

Are you confusing this with the Movies at Margate 8? This one disappears from all listings after 1993.

No, The address is wrong. It is where State Roade 7 hits Southgate Boulevard there.

This theatre was simply not on State Road 7 and was never run by United Artists.

The Margate Twin Cinema closed at the expiry of a 20-year leasing agreement on November 18, 1993 with “In the Line of Fire” splitting a screen with “The Firm” and “Striking Distance” splitting with “Sleepless in Seattle.”