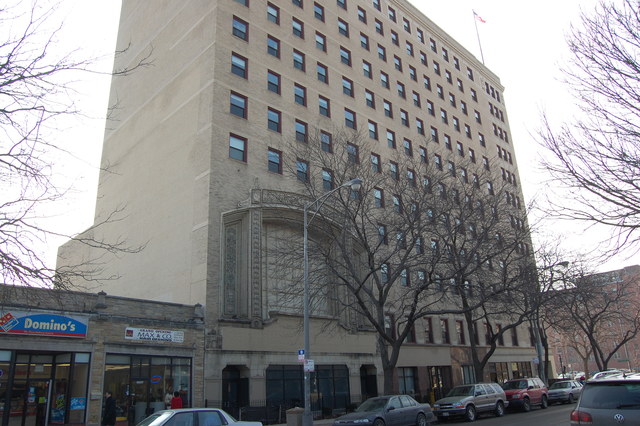 The Piccadilly Theatre was opened on January 24, 1927 with Reginald Denny in “The Cheerful Fraud” plus a stage show. Built and operated by the Schoenstadt circuit in the Hyde Park neighborhood, it was the flagship and the largest and most ornate house of their chain, which included such theatres as the Atlantic Theatre, Peoples Theatre, Harper Theatre, and Brighton Theatre. It was said to cost close to $3 million.

It was designed by the firm of Rapp & Rapp, their largest commission by an independent circuit. The Piccadilly Theatre was inside a large 14-story tower which also included the Piccadilly Hotel and shops along Blackstone Avenue. This was common for movie palaces in New York City, but a rarity in Chicago. Also unusual was the lack of a projecting marquee at the main entrance to the theatre on Hyde Park Boulevard, due to zoning restricitions. It did have a small one at the foyer entrance on Blackstone Avenue.

The marquee was flush against the front wall, and, like the enormous window above it, was trimmed by terra-cotta. Unlike many other Rapp & Rapp designed theatres, it did not have a vast main lobby, though its two-story height gave the illusion of being much larger than it truly was.

A small mezzanine contained what was known as a “music room”, which was actually just a piano, which was played before shows while patrons waited below in the lobby. The Piccadilly Theatre was amply decorated with antique furniture, oil paintings, and copies of ancient sculpture which the Schoenstadt family collected on frequent European trips to furnish their theatres, particularly the Piccadilly Theatre.

It was the auditorium of the Piccadilly Theatre however, that was the true treasure of this theatre. Designed in the Rapps' typical French Renaissance style, there were also flourishes of Art Deco present, also, which they would later use much more strongly in the Aurora, Illinois, Paramount Theatre a few years later.

The auditorium was designed with a large main floor and a horseshoe-shaped balcony terminating in faux “opera boxes” on the side walls. The two largest boxes, flanking the stage, contained a harp and a grand piano, never used until the theater’s last day decades later. This grand piano later found its way to the Fox Theatre in Atlanta. The Piccadilly Theatre was equipped with a Kilgen 4 manual, 19 rank theatre organ, which was opened by organist Leo Terry. The grand piano could be operated from the organ console.

The Schoenstadts ran the theatre for its entire existence and kept it in pristine shape even while the neighborhood that the Piccadilly Theatre was in began to decline. Starting in the 1950’s, attendance began to fall off and the Piccadilly Theatre was closed on March 31, 1963. The last films shown there was a double feature of “Son of Samson” and “Last of the Vikings”.

In 1972, the Piccadilly Theatre auditorium was demolished, though the Piccadilly Building still stands today, leased by the University of Chicago for housing and storage space. The terra-cotta facade of the theatre is still intact and in excellent condition.

Before they found the space at the York, THSA almost set up their operations there. It’s not the most practical space.

The space at the York is definitely better. I think it’s better suited for business and cheaper to maintain. They probably got a better landlord out of it as well.

There’s a bizarre photo of the auditorium taken in the late ‘60s during construction of a mock-up of Bertrand Goldberg’s San Diego Theatre project.

January 24th, 1927 grand opening ad is in the photo section for this theatre.

Some of the remaining lobby ornamentation has been recently removed and is supposedly going to be reused in a new restaurant in Hyde Park.

I wish they hadn’t done that. I was hoping one day someone might come up with a solid reuse idea for the lobby.

Restaurants also fail as often as they succeed. So hopefully the ornamentation doesn’t end up in a dumpster next year.

This and many more THSA pictures of the Piccadilly can be found at Explore Chicago.

“I was lucky to get a peak inside the former Piccadilly Hotel built in 1926 at Blackstone and Hyde Park Blvd. These are pics of the lobby of the Piccadilly Theatre and a dance hall on the top floor. The building is now top quality apts but these spaces haven’t been used in over 50 years.”