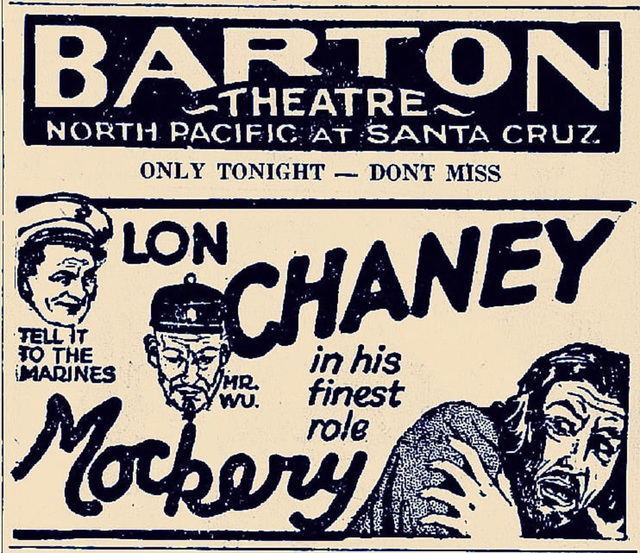 The Barton Theatre was opened on August 1, 1924 with Strongheart in “Love Master”. It was closed on June 28, 1951 with Randolph Scott in “The Cariboo Trail” & Steve Cochran in “Highway 301”. It was taken over by the Jehovah’s Witness organisation in 1955.

In 1975 it reopened as the Mermaid Adult Theatre. In 1977 it became a live theatre, home to the Showcase Theatre Group, returning to the Barton Theatre name. In 1981 it was renamed Star Theatre and screened Christian films. In 1983 it was in use as a church. It was closed and demolished in 1988 due to inadequate earthquake protection.

I wonder if that building marked “Wellington” at 227 North Pacific couldn’t have been the theatre, once upon a time.

Southwest Builder & Contractor of April 11, 1924, had an item about the Barton Theatre:

“San Pedro— Foss Designing & Building Company 1007 Pacific Ave, San Pedro, has the contract and has started work on a two-story theater and office building 45x100 feet at northeast corner of Santa Cruz and Pacific; estimated cost, $35,000. The building is being erected by Goebel Bros., who own the market building adjoining and will be under the management of P.H. Poirier. The theater will seat 500. The building will be Mission style throughout.”

The Foss Designing & Building Company was a Pasadena firm established by builder Robert Francis Foss in 1911. The San Pedro branch office was opened in 1923. Operating both as a general contractor for projects designed by other architects and as one of the region’s leading design-build firms, Foss Designing & Building Company was active at least into the 1980s as The Foss Company. The firm’s architectural and business records are held at the Huntington Library in San Marino. It’s possible that the plans for the Barton Theatre are among them, though it is also possible that this was only a contracting project. I’ve found a reference to the Foss company being the builders of the Strand Theatre in San Pedro as well, so it also might have been a Foss design.

For those who might be interested, this PDF of a document prepared by Tim Gregory is about a Foss-designed house in Altadena, but about half of the document is devoted to information about the Foss company.

The Barton launched August 1, 1924 with Strongheart in “Love Master.” It closed and was torn down in November of 1988 due to not being earthquake safe.

The Barton Theatre appears to have gone out of business after a double feature of “Cariboo Trail” and “Highway 301” on June 28, 1951 at end of lease. It was then used as a home for Jehovah’s Witnesses in 1955. In 1975, it became the Mermaid Adult Theatre showing X-rated theatre. It then became home to the Showcase Theatre Group with live plays in 1977. In 1981, it became home to the Star Theatre which brought motion pictures into the mix with Christian films screened. In 1983, it became home to the Calvary Chapel followed in 1985 by the Full Gospel Faith Mission. However, its listing should retain the name, Barton Theatre used most of its cinematic life and referred to it upon its razing in 1988.