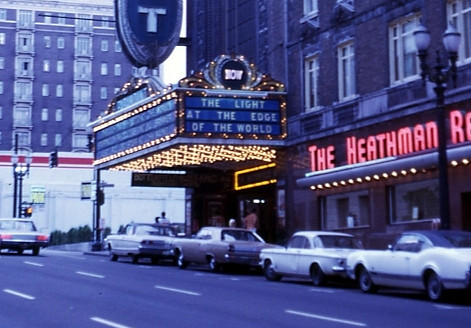 Originally opened by West Coast Theatres Inc. & Publix-Loew as the Portland Publix Theatre in 1928, the 3,400-seat, Italian Rococo Revival style theatre was designed by the Chicago-based architectural firm of Rapp & Rapp and Portland based architects DeYoung & Roald as associate architects/supervisors. Interior decorations were by Armstrong & Powers.

Renamed the Paramount Theatre not long after it opened, the theatre has retained its 60-foot sign with glows with over 6,000 lightbulbs.

The theatre is now the home of the Oregon Symphony and was renamed the Arlene Schnitzer Concert Hall in 1984. It remains a stunning testament to the work of Rapp & Rapp, renovated to the plans of ELS Architects.

Nice photos,every big city must have a PARAMOUNT,check out the PARAMOUNT in Nashville,Tennessee on C.T.it was razed in 1979.

The paramount theatre building and its outstanding marquee shows us
A little reminder of the magic of broadway from the past.

I am so thankful that the old paramount theatre still stands to this day.
When one looks at the large one of a kind maquee and all those lights
It gives a feel of what broadway was when the paramount and its
Sister theatre’s such as the broadway theatre, the fox, and liberty theatre
To name a few lined broadway and gave a person the feeling of somthing
Magical. And when one looks at the old paramount building and its many
Lights that light up the night one truly gets a look and feel of a by gone era.

Does anyone have any information on original Paramount theatres that are still open but perhaps had a name change such as this one? I’ve been searching for all the original’s opened under Paramount-Publix and am wondering if there are more now under a different name. Arlene Schnitzer doesn’t show up in a Paramount search and I’m not finding anything when I link terms together (ie Rapp & Rapp, Paramount, Publix,1930 era etc.) so any info on how to get at least get a list of originals would be great, thanks.

A few photos can be seen here and here.

The Heathman Hotel, which contains the entrance to the Arlene Schnitzer Concert Hall, was designed by Portland architects James W. DeYoung and Knud A. Roald. Knud & Roald also acted as supervising architects for the construction of the Paramount Theatre. 23 photos of the interior of the Paramountare in the DeYoung and Roald Architectural Plans and Photographs collection at the University of Oregon Library at Eugene, Oregon. The collection is open to the public, but can be viewed only in the Special Collections & University Archives Reading Room.

Grand opening ads as Portland and Paramount can now be found in the photo section for this theatre.

For those of us who remember the Paramount before its makeover in 1984 the present manifestation of the building leaves much to be desired. It seems like they ran out of money somehow and realized that there would be no cost-effective way, given the budget, to execute an authentic refurbishment and enhancement of the theatre as they had done in the case of the exterior and lobby. There were three or four shades of gray and bluish gray accented by gold and a complex system of indirect cove and pocket lighting with which pretty much any color of the rainbow could be produced in the auditorium. This made for a striking contrast between the painted color scheme and lighting. The giant hand-painted autumnal and romanesque murals on either side wall of the balcony were painted over with a solid light beige. The Paramount auditorium was originally something of a brooding, bejeweled cavern. Very tall and long in it’s feel. Little of any of that feel exists today. There are numerous photos of today’s rendition of the theatre on Google. The fact that the did save the building keeps hope alive that someday Rapp and Rapp’s creation will once again appear.

Seattle still has it’s original Paramount theatre and it has been completely restored with even a larger stage and new seating. All the biggest shows are playing there.