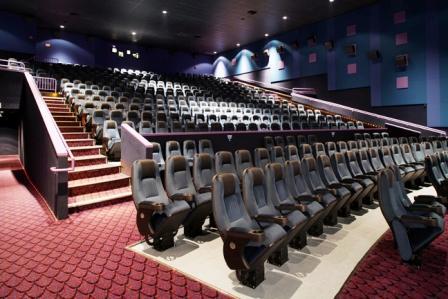 Opened June 1, 1998, this 16-screen, four-story, 4,200-seat multiplex in a suburb south of Boston brought to the area a new generation of state-of-the-art cinemas with raked, stadium-style seating and Dolby Surround Sound in all theaters, large screens with curved screens in the largest halls, and a dedicated digital auditorium which has now been expanded to several four more. A unique feature is two of its stories and half of its auditoriums are below ground.

In December 2007, in two of its halls, it added a prototype lux level balcony featuring leather rocker chairs and loveseats with personalized food and beverage service delivered to the chair. The concept is being rolled out in other Showcase cinemas.

The megaplex, however, is not without controversy. In the mid-1990s, National Amusements was in a race with Hoyts Cinema Corp. which intended to develop a similar 16-screen megaplex just 400 yards away in Stoughton. Lawsuits flew between the companies and the towns before Hoyts withdrew.

Traffic became a major problem immediately after the megaplex opened. With less than 900 parking spaces for 4200 seats, NA’s estimate to the town of 4.5 people per car was wildly inaccurate. Arrangements were made to rent night and weekend parking from a business across the street, and hire a squad of detail cops to handle traffic, but in 2002 NA was forced to pay for a widening of Route 139 in Stoughton and Randolph. In 2003, NA paid $2 million for a funeral home across the street that it razed to create more permanent parking.

National Amusements reports it is its busiest theater out of 120 theaters worldwide with one million tickets sold annually. However, new stadium-style cinemas south of Boston in Foxborough (2008), Brockton (2009) and Dedham (2009) may decrease admissions in the future.

In 2007, the megaplex received an overhaul in conjunction with the creation of the de Lux level. New seats were purchased, additional railings were installed, minor repairs were made and new carpeting was put in place. The updating assures that the theater will continue to be a crown jewel in the Showcase Cinemas chain.

What has happened to all of our CT posters in eastern Massachusetts? This page was created weeks ago and so far there have been no posts to it. If Dan Petitpas had set up this page in, say, 2004 or 2005, there would have been a dozen posts here by now.

The live screenings of the Saturday matinees from the Metropolitan Opera House in New York are proving very popular at the Showcase in Randolph. Friends who attended the performance of “Madame Butterfly” last Saturday afternoon report that 3 auditoriums were used and they appeared to be full. Tickets cost about $20 for regular seats and about $30 for Lux-level seating. This is far less than tickets to the actual performance in New York.

I know this theater well – I grew up about a 5 minute drive from it, and remember the area before it was built(I was a teenager at the time).

The land the cinema is on was empty(as opposed to the strip mall next door(that used to be Russo’s House Of Sunshine(a greenhouse/nursery), which is now is West Bridgewater. All redeveloped when the theater went in. There also used to be business across the street – all victims of “Showcase Cinemas Randolph and The Quest for More Parking”. These businesses were:

Levine-Briss Funeral Home(as noted in the description)
CRC?? (My memory is a bit fuzzy here, but there was a business inbetween the funeral home and Middle Atlantic).

At any rate, the cinema and strip mall completely chamged the area. Traffic was, and still is, a nightmare. It’s probably the biggest knock against this theater – parking and getting in and out is a NIGHTMARE when it’s busy. Other than that, it’s a pretty nice theater, albeit spread out over three levels and several escalators.

There’s was a rear entry/exit ramp from the main parking lot, but it was blocked with a metal gate pretty early on. Why? Because having traffic spill out onto West Street(behind the cinema, parallel to Mazzeo Drive) became a epic traffic nightmare, and the town woudn’t tolerate it.

The last film I saw here was THE DAVINCI CODE. I moved from the area a scant two months later.

Personal anecdote: I remember bicycling down here during construction(I was 15 at the time) to apply for a job. They didn’t hire me. My brother applied a couple of years later; they did hire him. And he hated it! ;)

Here’s a picture of the Randolph Cinema, front entrance.

There’s a good review thread of the Showcase Randolph on Yelp.

The name is to be changed this spring to “Showcase Cinema de Lux”, according to an article in the biz news of yesterday’s Quincy Patriot Ledger. The article says that the cinema has 16 screens, over 4,000 seats, occupies 82,000 square feet, has 15 full-time employees and 150 part-timers. Recently converted to all-digital projection. It has installed an IMAX screen which is 40% larger than the screen it replaced. I have friends who go here regularly to attend Saturday matinees of the Metropolitan Opera from NY, and they love this cinema.

I have been to the Randolph many times over the years and it is about 25 miles from me. The so called IMAX stinks. It is too small. Parking is brutal and getting out especially if you are headig east is impossible. My wife and I will never go there again. For IMAX we will go to Natick for the real thing not the imitation. For regular movies we will go to our closest theatres in Hingham, Scituate or Hanover. Cheaper any way especially on Tuesdays. Neither one of us likes 3D because most theatres don’t know how to show it properly. I was a projectionist for many years. .

This opened on July 1st, 1998. Grand opening ad in the photo section. 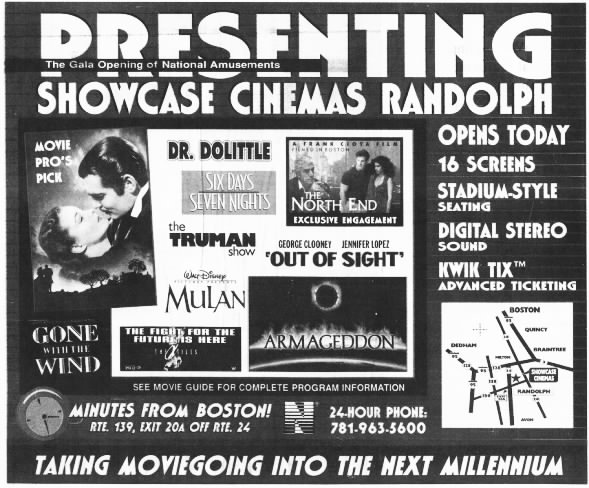