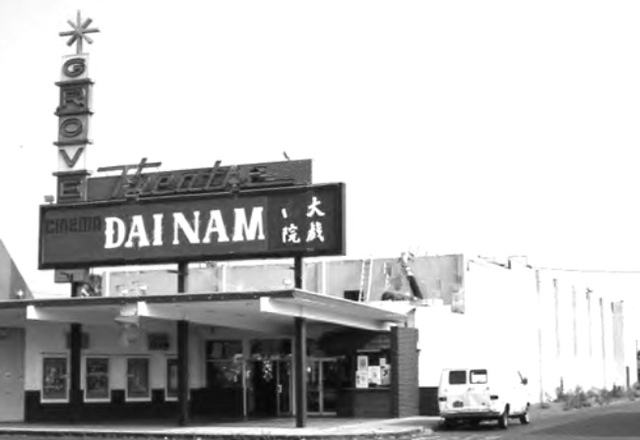 The Grove Theatre was a plain strip mall theatre nestled among other shops with a five-acre parking lot in front. When it opened on August 20, 1957, it was a non-event, just a small advertisement in the Santa Ana Register that read: “We are now open - Elvis Presley in "Loving You” was the main attraction. Typical 1970’s fare that might create standing room only would be “Billy Jack”.

The original number of seats is unknown but sometime in the mid-1970’s the name was changed to the Grove Twin, which still left two fair sized auditoriums, each seating 375. For many years it shared advertisement space in the Register with the Brookhurst Theatre and Loge Theatre in Anaheim, which like the Grove Theatre, were Vinnicof Theatres, a small chain, with locations in LA and Long Beach. In fact their advertisement appeared regularly in the Long Beach papers also. After June 28, 1979, its advertisement no longer ran in the papers and no other theatre again opened there.

By 2008 the Center was demolished and a modern office building was constructed on the site. The Grove Twin should not be confused with the Gem Theatre, an older theatre on Main Street, which still exists.

Harry Vinicoff was a long-time exhibitor in the Los Angeles area. The earliest reference to him I’ve found is from 1937, when Vinnicof bought the Eagle Theatre in the Eagle Rock district of Los Angeles. At various times, Vinnicof also operated the Congress Theatre and the Temple Theatre, both on south Vermont Avenue in Los Angeles.

There’s also a brief item in the May 6, 1950, issue of Boxoffice magazine saying that Harry Vinnicof had shuttered his Maynard Theatre in Los Angeles due to poor business conditions. The Maynard Theatre was on Washington Boulevard at Arlington.

In the 1950s, the Vinnicof circuit owned a half interest (Edwards Theatres owned the other half) in the Garfield Theatre in Alhambra. After the Grove opened, the Garfield sometimes used tickets printed with the Grove Theatre name on them.

The first instance of the name Vinnicof in my comment above is misspelled. It’s supposed to be two n’s and one f.

Here is a 1983 photo when the Grove was showing Vietnamese films:
http://tinyurl.com/ozzond