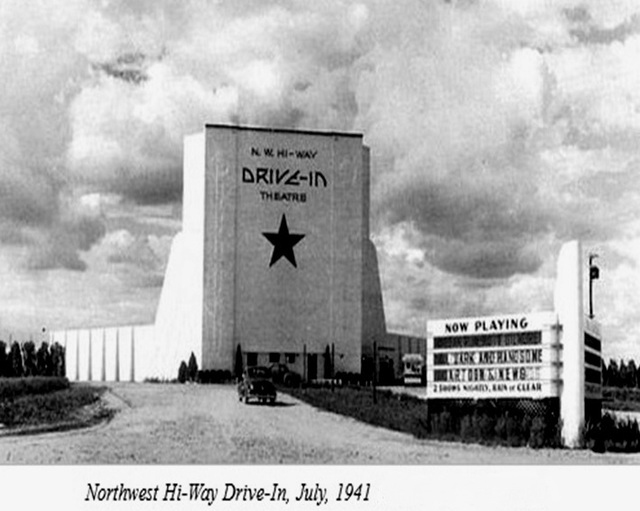 Was mentioned in the documentary "Drive-In Movie Memories" in 2001.

Matt54, from what I’ve seen at Historic Aerials, it looks like the Northwest Highway’s sister theatre, the Bowie Boulevard Drive-In in Fort Worth, didn’t make the Cinemascope upgrade, either, and it closed in 1961. On the other hand, the Chalk Hill (another Underwood & Ezell theatre), did, and survived into the 1970s.

Speaking of these three theatres, I have a question about whether the Northwest Highway featured a mural on it’s screen tower or not. When upgrades were made in 1946, it’s sister theatres, the Chalk Hill and Bowie Boulevard, added murals. The former pictured a circus scene around a large clown’s head, while the latter depicted a cowboy on a bucking bronco. Anyone know about the Northwest Highway, or can recollect any details? Thank you.

Larry, if memory serves, the NW Hwy did have a clown mural, along the same lines as the Chalk Hill and Buckner Blvd., at the time of its closing. It was different from the Buckner’s empty-eyed freak clown, though, in that it did not give me chills up and down my spine.

Status can be changed to “Closed/Demolished” since I can remember many good meals at the Kip’s Big Boy built on the site as soon as the drive-in was torn down in the early 60’s.

I wish there was a picture of the screen online. I remember this well. I grew up in that area and I was born in 1954. I remember it being torn down and the Kip’s and the shopping strip mall being built there. I too, remember the clown on the front and remember Kip’s with fondness.

I have to tell a funny story on myself. When I was about 5, I was in our back yard looking south; I could have sworn I saw what looked like Godzilla storming the country side on the southern horizon. I told my parents about it, but they just dismissed it as a kid’s imagination. Over the years and decades I thought back on to that and wondered if I, as a kid, was just hallucinating. Many decades later, in the late 1990’s, I ran into some of the “greatest generation” folks who still lived on Prestonshire Ln, and we talked about the old days of that neighborhood. They told me they remembered how far they could see because there were practically no tall trees in the 50s, and that they could easily see the movies on the screen of that drive-in on Northwest Highway.

Then it hit me. It’s likely that what I had seen was an actual Godzilla movie being shown on that movie screen. Being just around 5 years old or so, I just interpreted it as the real deal. I guess I’ll have to go to the library in downtown Dallas (a bit of a drive as I now live in McKinney) to peruse the microfiche copies of old Dallas movie ads to see if/when Godzilla played there around that time.

If we change the status to demolished, would it get rid of the google street view of that address? I think showing where it was in relation to what’s there now has some value.

Thank you very much for your story, David, and for confirming the appearance of the clown’s head on the screen tower. In doing some quick Googling, you either saw ‘Godzilla, King of the Monsters!’, which was released in 1956, or ‘Gigantis, the Fire Monster’, which was released in 1959. I highly recommend a trip to the Dallas Public Library in downtown, as you’ll find some fascinating movie ads and drive-in theatres now long gone. Good luck on your search, and please let us know what you find out!

Larry; the time frame would have been Gigantis, then, in 1959; we didn’t move in that house until 1958, and in 1956, I would have only been one year old for most of the year. It either was Gigantis, or a re-run of Godzilla. Did you search just IMDB or do you have access to the Dallas Morning News archives online and looked up the movie listings?

I did a Google search for it, David. I believe the Dallas Morning News has an online archive, but it would be restricted to viewing exclusively from a public or college library, and I wouldn’t know if it would consist of only text or the actual paper. Also, there would probably be a subscription fee involved if it was accessible from a private PC. In doing research on the drive-in theatres of Fort Worth, I’ve come to discover that the Star-Telegram’s complete archive is availble only at the Central Library downtown, so maybe a trip to Dallas’s downtown library will yield some “treasure” for you!

LarryFM. Signup with Genealogybank.com. They have the Morning News online along with other titles.