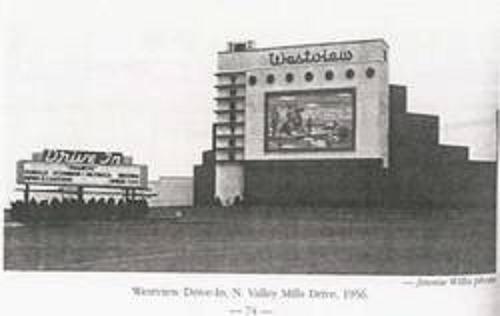 Sidenote: Google has 1 of the businesses @ the mall listed as XXI Forever! REALLY?

Newman Theatres opened the Westview Drive-In in Waco with capacity for 475 cars launching in 1948 with the film, “Emperor’s Waltz.” The theater was said to have been at 731 North Valley Mills at the corner of Sanger; however, looking at Historic Aerials, the present address would be 815 N. Valley Mills where the Taco Bueno was as of the mid-2010s.

Though always in the hands of Mr. Newman, the circuit changed names to the Central Texas Theatres Circuit during the Westview’s ten year operation. The theatre closed just prior to Christmas in 1958 with the double feature of “Dunkirk” and “The Reluctant Debutante” on December 21, 1958. The next ad said closed for season and the final ad the following February said basically thanks for the memories. The theater was at the end of a lease cycle and the land sold to Colias Brothers to become the third location of Waco institution Elite Cafés with this location being the long-running Elite Steak House and other retail operations to be named. The demolition began February 4, 1959 by Wortman & Son of Houston.