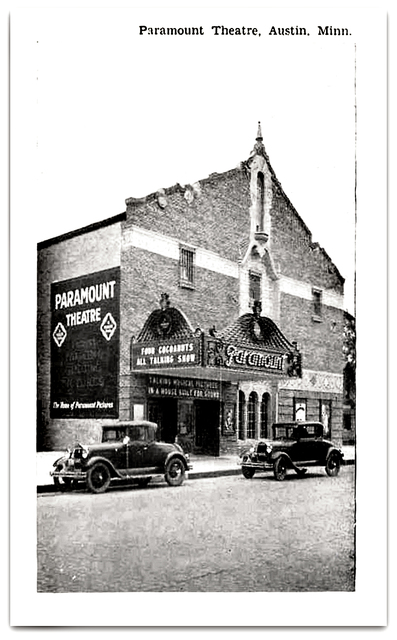 Opened in September 1929, the Paramount Theatre, which originally seated 914, was designed in the Atmospheric style. It was designed by the firm of Ellerbe & Company.

Its auditorium resembled a Spanish courtyard, with a ‘starry sky’ on the ceiling. The side walls were decorated with scenes of the Spanish countryside, divided by colonades.

It contained a small stage and orchestra pit since it hosted both live shows as well as films in its first couple decades. The exterior was built in the Spanish Baroque style, with decorative terra-cotta work and an arched window over the marquee.

The Paramount Theatre continued to delight the citizens of Austin for nearly half a century, before it was closed in 1975.

From the late-1970’s into the late-1980’s, the former theater served as everything from a nightclub, to a teen dance club, to a comedy club before closing again and standing vacant for several years.

The Paramount Theatre was named to the National Register of Historic Places in 1986, as one of the few Atmospheric style theatres remaining in Minnesota.

The Austin Area Commission for the Arts was formed in 1990 and purchased the theatre two years later with the intent of transforming it into a performing arts center and a venue for classic films, concerts, and civic events. It will also be home to the Matchbox Children’s Theatre.

Since 1996, restoration work has begun in earnest, and much has already been completed. The roof has been replaced, the lobby repainted in its original colors, and a 1950’s era marquee removed and replaced with a replica of the original 1929 one.

The restoration of the Paramount Theatre has been completed, the theatre is now alive with performances both live and on-screen, and is once again the centerpiece of downtown Austin.

We are high school students from Owatonna, Minnesota and we are doing an independent study project with one of our teachers, Mr. Metzler (youâ€™ll notice that we are using his email, but correspondence will be to/from us). We are exploring the idea of re-opening a small movie theatre that is in the middle of our struggling downtown area.
After searching the web for theatres that had renovated to improve their downtown areas, we came across your website and are looking for any information or ideas that you might have for renovating our 1935 theatre. More specifically, we are looking at ideas for generating adequate funding, increasing community awareness and support, and the actual renovation of the theatre. Before/after pictures of renovations would also be appreciated.

Thanks for anything you can provide,
Tessa Wheelock
Emily Leuning
Sara Kramer

This 1966 article from the Austin Daily Herald gives an interesting recap of theaters in the city:

In 1910, Sunday movies became legal, and the first real “chain” theater management was born with the establishment of the Unique Theater in the old Woolworth building on Main St. South. American Amusement Co., the Minneapolis owners of the Unique, also purchased the Idle Hour, changed the name to the Princess, and opened the Lyric Theater (later known as the State) on Water St.

The Princess burned down between 1911 and 1915, and the chain owners sold out to F. F. Latta, who operated the Lyric and the Unique, and renamed the latter the Cozy. From 1915 to 1921, Vic Phelps opened the Majestic on the old Piggly Wiggly site; the Park on Water St. was destroyed by the tornado in l928 and was replaced by the Paramount; the Rayman brothers opened the Star on Main St.; the Eagle opened on the East Side; and the Austin became the final Main St. movie theater.

Alan Ladd hadn’t ridden across the screen at the 50-year old State Theater for about four years when it lost its other-era face this summer to the glassed front Goodwill Industries. Austin’s two newest theaters are the Outdoor (1948) and the Sterling (1951).

The name of the architectural firm is currently misspelled above (and on the pages for the other two theaters designed by Ellerbe & Company.) It should be Ellerbe, ending with one e. The company was founded in 1909 by Franklin Ellerbe and, upon his death in 1921, was taken over by his son Thomas F. Ellerbe who, as lead architect, expanded the firm into the largest in Minnesota.

Thomas Ellerbe was an avid supporter of co-ops and eventually converted his firm into an employee-owned organization, which it remained until merging with Welton Becket and Associates (designers of Pacific’s Cinerama Dome in Hollywood) in 1987. The successor firm, Ellerbe-Becket, remains in operation today.

The Paramount Theatre at Austin was originally planned for the Finkelstein & Ruben circuit, which was taken over by Paramount before construction was completed, and the house opened as the Paramount under the Publix banner in September, 1929.

From the 1920s a photo postcard view of the Paramount Theatre in Austin.