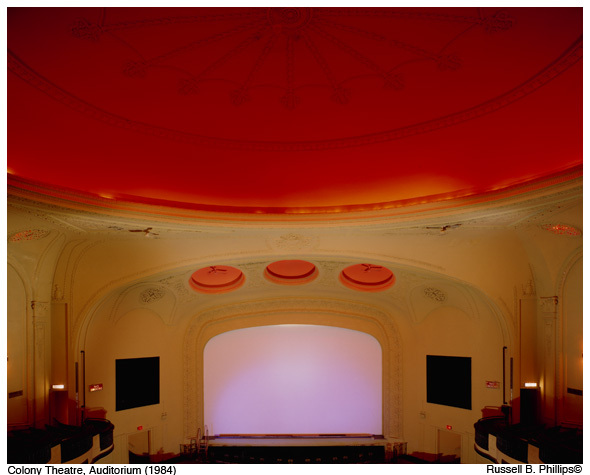 The firm which designed the theater was Lowenberg & Lowenberg, in Italian Renaissance style, complete with cream-colored terra cotta decor on its red-brick facade and a row of arched windows over the main entrance.

Since then, the theater has been vacant. It did very briefly come to life for a few days in the late-1990’s when the former CBS series, “Early Edition”, which filmed on location in Chicago, used the Colony Theater’s lobby and exterior for a scene.

This theater looks to be a sound building after looking at the pictures posted. Are the seats still there?

No, the main floor seats were taken out years ago. I’m not sure about the balcony.

Tinseltoes, I think that must be the Drake theater, I see no other Ascher theaters opening 1925-1926 and the pictured theater has no balcony.

I saw “it’s a mad world” and “fall of the roman empire” there and used to go to a soda fountain next door to it. It should be restored. Wonderful memories.

The currect owner has kept this theater in great condition and is just waiting for a serious person with the capital $450-$500,000 to get the building in shape along with $500,000 + in reserve to insure it could stay open.

If Thalia Hall can finally come back, maybe the Colony can too.

How does anyone get in contact with the owner? I’m looking to open the theatre……

Justin; Go down there and ask one of the business managers (within the premises of the Colony Theatre building) who owns the property and get some contact info.

THE SHEBOYGAN PRESS, SATURDAY, OCTOBER 17, 1931 – Picture And Bomb Climax Simultaneous In Chicago ——————– During these weeks, 16 bombs have been hurled, 14 of them at theatres involved in the fight. Until last night, all were exploded outside the show houses. The 14th and 15th, both thrown yesterday, were hurled at theatres not involved. Owners said they must have been “errors.” Besides Mooney, the other seriously hurt last night were Edward Foy, city fireman, and Edward Schaeffer. Several women wera slightly hurt. The war between owners and operators started when the owners rebelled against ,a union rule requiring two operators in every theatre. When efforts to compromise failed, the owners locked out the operators and imported non-union men from New York to replace them. The bombings began, continuing since at the rate of about one a day. Thomas Maloy, under indictment on conspiracy charges and accused of being a racketeer, is head of the union involved in the controversy.

Chicago (UP) The theatre bomb war and the moving picture “Dancing Dynamite” reached their climaxes at the same time last night in the Colony theatre on the southwest side. Just as the climax of the picture came, flames shot upward from the center of the audience of about 800 persons. Two other patrons, one a fireman off duty, tackled the fleeing man and beat out the flames. All three were seriously burned. The man who fled was Peter Mooney, 30, a former convict. Police were convinced he carried a sulphur bomb into the theatre, intending to terrorize patrons by tossing it among them, but that he blundered and the bomb exploded in his lap. Officers said the incident undoubtedly would prove the climax of the controversy which has been waged for weeks between owners of 104 independent theatres and the union operators whom they locked out.

So what does it look like inside? What is happening with the interior?