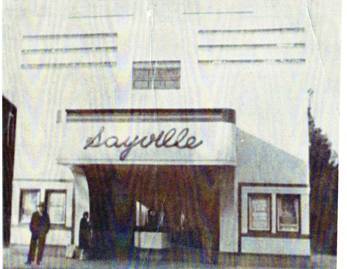 On May 28, 1930 it was taken over by Prudential Circuit and it was re-named Sayville Theatre. It was remodelled in 1935 to the plans of architect John Eberson. It operated until spring of 1951, when the new Sayville Theatre was built and opened on an adjacent site.

An article in the Suffolk County News in 1927 indicated The Sayvile Theater was being remodeled and would have a seating capacity of 700. There are also references to complete rebuilding in 1935.

Added to the Prudential Circuit in 1930/

Funny story in the Brooklyn Gazette of March 15, 1922. The theater sent out announcements of the coming films. It was the job of the cashier to address them. A number were to go to Bohemia, an adjacent village. The cashier did not indicate Long Island or New York and they were sent overseas. When returned there was a charge of 2 cents per flyer.

Don’t know how common a practice this was but in later years both Century and Prudential had weekly Guides. Century had three, Brooklyn, Northern Queens and Queens – Long Island. Prudential had Nassau-Western Suffolk and Eastern Suffolk.

The April 6, 1935, issue of The film Daily said that the Sayville Theatre was soon to be remodeled:

“John Eberson, architect, has been commissioned by Prudential Playhouses to handle the complete remodeling of the Sayville Theater, Sayville, L. I. Alterations include exterior, interior and practically all equipment and furnishings.”

The address of the original Sayville Theatre was probably 107 Railroad Avenue, if as robboehm says it was next door to the north of the site of its replacement at 103 Railroad. The building the other side of the parking lot is at 111-113 Railroad.

A two year lease was taken on the, at then, Novelty by William D. Eccleston, who was building a chain of theatres, on December 20, 1920. The owner, Henry Kost, tried to break the lease in September 1921 because of late payment of the August rent of $125. Eccleston wanted Kost to take the payment from the receipts of his Comet Theatre in Bellport which Kost managed for him. The rent was paid in court and Eccleston said he would now personally manage the Comet. Kost said that he would take measures to have Eccleston ousted from the Novelty. To be continued.

Other than a notice that the Comet opened in May 1919 I have, to date, found no other references to it other than the court cas.

On November 7, 1935 there was a breakin at the theater.
Thieves didn’t get much but they used lighted newspapers as a light source, the charred remains of which were found. Fortunately no fire resulted.