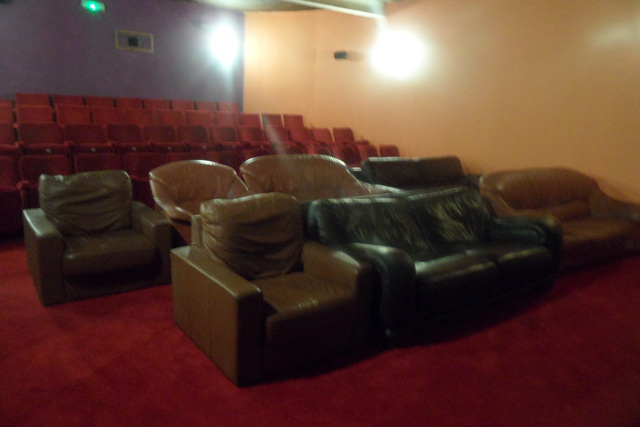 Designed by architect F.C. Mitchell for the A.E. Abrahams chain, it was taken over by the Oscar Deutsch chain of Odeon Theatres Ltd. and opened as the Odeon on 4th January 1937. The opening film was Freddie Bartholomew in "Little Lord Fauntleroy".

The cinema has a corner entrance with a curved facade with five narrow windows allowing light light into the circle foyer/restaurant area. The auditorium was quite plain, and the only decoration was a decorative grille on each side of the square proscenium and a double trough in the ceiling which contained concealed lighting. Seating was provided 1,593, with 1,077 in the stalls and 516 in the circle.

The Odeon was sold to Classic Cinemas in December 1967 and was re-named Vogue Cinema. It closed on 13th January 1968 with a childrens matinee performance, the main feature being the 1948 film "My Dog Rusty" starring Ted Donaldson. The building was converted into a Vogue Bingo Club.

On 9th January 1971 a 111-seat Classic Cinema opened in what had formerly been the restaurant and in 1972 a 300 seat screen opened in the former circle. The stalls area remained in use as a bingo club. Mecca Leisure purchased the building and operated a Mecca Bingo Club in the downstairs area, and the cinemas were leased to the Cannon Group and re-named Cannon.

However this was not to be, as the New Century Cinema was closed on 26th February 2009. It was refurbished and re-opened 27th January 2015.

I am sad to relate that the New Century Cinema has now closed down. It played its final film on Thursday 26 February 2009. The cinema was closed due to dwindling attendances.

There are plans in the pipeline to convert the New Century Cinema building into a night club.

The website of the Rio, Burnham on Crouch has information on this cinema, and they plan to re-open both screens in December, 2014.

The New Century is reopening this December (2014). The new website is: www.cinemasittingbourne.co.uk

The date announced for re-opening of Screen 1 is January 27th, with What we did on our holiday and The Imitation Game. Screen 2 to follow, Several catch up films are programmed such as the Hobbit.

The 8 screen Light Cinema opposite the station is well advanced with March 2020 as a likely opening date. This could affect the future of the cinema half of the New Century.