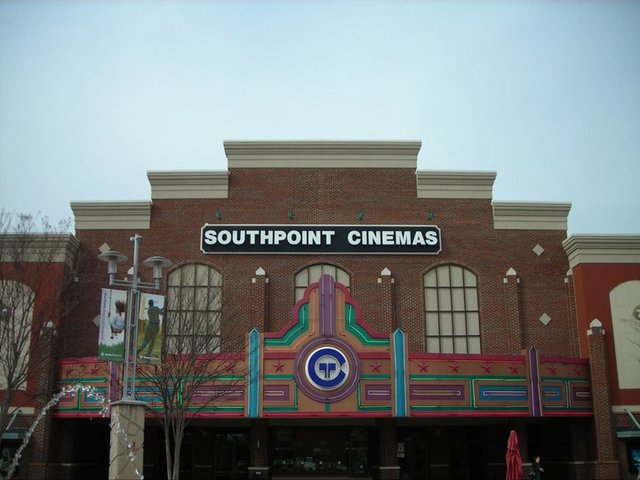 Opening on March 8, 2002 as part of the Consolidated Theatres Group. The Streets of Southpoint Mall Cinemas 16 became the second megaplex theatre in the greater Durham-Chapel Hill area. The cinema is located at 8030 Renaissance Parkway, near the intersections of Fayetteville Road and Interstate 40. All auditoriums have stadium seating with the state of the art digital projection, full Dolby and DTS digital sound, luxury high-back chairs and huge concession stand along with advance ticketing. The theatre serves the following areas of Southwestern Durham County, Research Triangle Park, and attracting customers as far away as Chatham and Alamance Counties.

The addition of the IMAX auditorium came on May 20, 2011 when it was under Stone Cinemas. As of January 18, 2013, AMC Theatres acquired the Southpoint Mall Cinemas operations that includes the IMAX screen. In 2019 AMC converted it into a dine-in movie theatre.

If AMC does get the Southpoint 16 and builds a theater at Triangle Town Center, it may be the straw that breaks Carmike’s back in the Triangle. After AMC built North Carolina’s first stadium-style multiplexes in Charlotte, Carmike got out of the Charlotte area soon after. It seems to me that AMC and Carmike cannot co-exist in the same market, at least in North Carolina (AMC sold the Carolina Circle 6 to Carmike and left Greensboro). Ironically, when Triangle Town Center was under construction the developers announced that Carmike would build a multiplex at their mall (nothing came out of that proposal)

Edwards is part of Regal Entertainment Group (REG). If REG acquires the Southpoint it would operate under the Regal name, not Edwards; Edwards is used by REG mostly on the West Coast. All REG theatres in North Carolina have operated under the Regal nameplate since the UA Garner Towne Square 10 was sold off to Carolina Cinemas. Oddly, the Southpoint 16 was one of several theatres Regal was forced to sell off as part of the Consolidated takeover (Raleigh Grande 16 and UA Garner Towne Square 10 were among the others).

This location is being acquired by AMC along with 9 other Rave locations. As for a “30-plex” being built somewhere else nobody builds them anymore – not profitable.

As of January 18,2013, the Southpoint Mall Cinemas and IMAX has been acquired by AMC Theatres(American Multi-Cinemas)….the theatre has been listed as having 16 screens,but instead has a 450 seat IMAX theatre so that would make it 17 screens. This is AMC Theatres' first operation in the greater Triangle area. More information is on this website: www.amctheatres.com/movie-theatres/amc-southpoint17

FYI: The IMAX screen was built under the STONE THEATRES ownership, not Rave. Rave took over in January 2012. And the IMAX seats 358, not 450.

The addition of the IMAX auditorium opened on May 20,2011 under Stone Theatres Group with a seating capacity of 358 for its grand opening feature with Johnny Depp in PIRATES OF THE CARIBBEAN:ON STRANGER TIDES

Don’t know when this happened, but as of 2019, AMC has turned the Southpoint 17 into a dine-in movie complex with the new name “AMC Dine-In Southpoint 17.” It says so on their website.