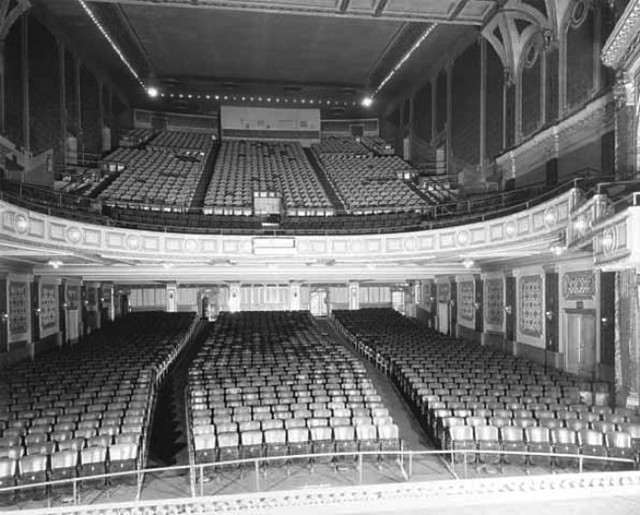 This theatre opened November 27, 1916 as the New Palace Theatre and could seat 3,000. It was built on the site of the old St. Paul Public Library which burned down a couple years earlier. The architects were Henry Orth and Charles Buechner and the Palace Theatre was part of the Finkelstein & Ruben circuit.

Opening day newspaper advertisements gushed about the “New Palace” calling it, “The Show Spot of St. Paul”, “St. Paul’s Own Palace Beautiful” and “A Delight to the Artistic Eye”. Finkelstein & Ruben supposedly told their architects that they wanted the Palace Theatre to resemble a theatre they saw and liked in Buffalo, New York, the Shea’s Hippodrome Theatre.

In the 1940’s, RKO remodeled the Orpheum Theatre, including a new lobby, facade and signage and greatly reduced seating (to 1,400). Twelve years later, Ted Mann purchased the theatre from RKO. First run films ended at the Orpheum Theatre in 1977. For a few years, the theatre was open sporadically showing classic films, but closed permanently in 1984.

The historic theatre – once a prominent spot for nightlife in the city of St. Paul – stands today in disrepair and its future remains uncertain.

In November 2013, it was announced that a £12 million renovation was planned to convert the Orpheum Theatre into a live music venue, which opened March 10, 2017.

Whilst it would great to see the house fully restored to its 1916 glory, I expect that due to the cost it will (if ever) be re-done back to the 1940s style. Nevertheless, bringing it back to life will be great for downtown St. Paul.

Bringing ANY theatre left in a downtown area would bring life back to these ares.

The photos referenced in TC’s 2005 link above appear to have been done right after the 1940s renovation. They are all dated 1943, and everything looks all freshened up. The good news is the original decor is almost completely intact – just a few minor art deco touches here and there (movie poster cases in the lobby, etc.)

The auditorium photo is intriguing – it looks like there are about 1,800 seats there (the description says 1,400 after the renovation). I can’t figure how the auditorium could have originally held 3,000 – unless there was a 2nd balcony that was completely removed during the renovation.

does anyone know who is the current owners of the palace and how to get a hold of them?

This place is being revived as music venue: http://blog.thecurrent.org/2013/10/st-paul-plans-to-renovate-and-reopen-historic-palace-theater/

Here’s a news update about the Palace (Orpheum) renovations. It also shows the new owner/manager is Jam Productions and that the restoration is almost complete and it will open sometime in early 2017.

For now it’s little more than a placeholder, but does announce it will open in 2017.

The city of Saint Paul held an open house for the renovated theater today. The project went years longer than originally scheduled, and the final cost was $15.6 million — far more than anticipated. Mayor Chris Coleman ran into enormous resistance from the city council on this project, and he deserves credit for sticking to his guns. It’s a great intermediate live-music space. It’s bigger than venues like First Avenue, the Fitzgerald and the Cedar, and smaller than XCel Energy Center and similar arenas. Regina Spektor is the first act booked for the new space, and she’ll be there in March 2017. I’m very happy that this beautiful space has been restored.

The Palace reopened this past Friday. Status should be changed to Open as a music venue. Here are two articles. The second of which has photos.

The following article has some good interior photos and descriptions of the renovations: