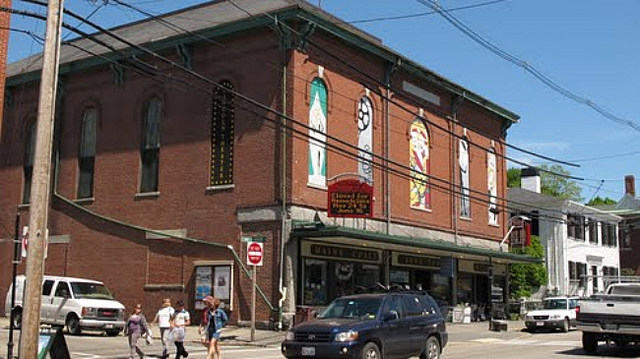 Opened in 1876 as Lincoln Hall, a venue for various forms of live entertainment, civic functions, dances, and later, roller skating. By the 1920’s the building had become a 500-seat movie theater, a function it retained for several decades.

Today the Lincoln Theater is owned by the Lincoln County Community Theater and Orchestra, and hosts live entertainment once again, as well as showing movies on a regular basis.

I visited this delightful little theater during Damariscotta’s Pumpkin Fest to see the film “Frank and the Robot.” There were only six people at the Saturday evening presentation. Earlier in the day, it gave a free showing of “Rango” and the next day it was broadcasting the Pumpkin Regatta for free. The auditorium itself is on the second floor of the building and it is accessed through an addition in back that added an office, an elevator and handicap-accessible rest rooms. I was told that the theater had been a work-in-progress until recently, slowly adding reproduction wall treatments, Dolby Surround Sound, video projection and brand-new movie seats replacing folding chairs. It currently looks pretty much completed. The floor is flat composed of wooden floorboards that look very much like those used in old gyms. It was supposedly used for roller skating in the early 1900s. The screen is built into a stage that’s wide but not very deep. The theater website lists capacity at 231 seats. Its schedule consists of films, opera broadcasts from the Met, theatrical broadcasts from the National Theatre, and live performances of plays and concerts. It has one to two showings a day, an early evening show at 7 pm and a matinee some days around 1 pm or 2 pm. Films only play from one to three days. The official website is: Lincoln Theater and it is operated as a 501©3 nonprofit organization.

The Theatre Historical Society archive has the MGM Theatre Report for the Lincoln, it’s Card # 359. Address is “Grove St.” There is an exterior photo taken March 15, 1941. Condition is Poor. The repor says it opened about 1905, shows MGM films and had 500 seats. 1940 population was 800.