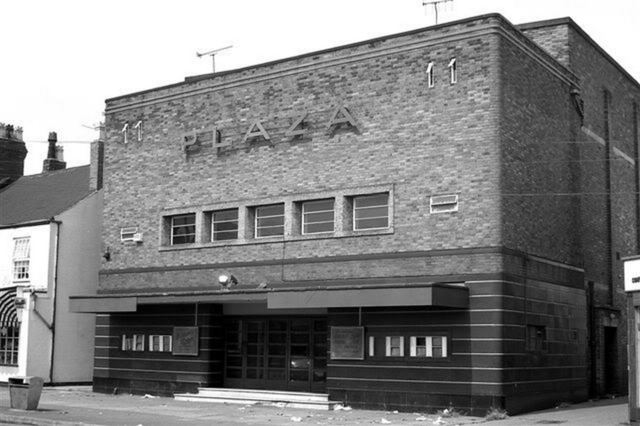 The Plaza Cinema was initially listed as being in Connah’s Quay, although it is actually located in the Queensferry district. It was built for Deeside Enterprise cinemas costing around £12,500. The architect was Sidney Colwyn Foulkes, a well known cinema architect from nearby Colwyn Bay, North Wales. Deeside Enterprise made the Plaza Cinema their head office, running several cinemas from there, including the Park Cinema, Saltney, Chester.

It opened in December 1936 with the film “Rose Marie” starring Jeanette MacDonald. There were left and right staircases leading to a small upstairs lounge. Originally there were two payboxes, but in later years only one was used. The foyer floor and staircases were cream terrazzo. There were red carpets in the auditorium and the seats were plush red. There were two sets of screen curtains in silver velvet with a gold fringe. Proscenium width was 25 feet and the lighting was by Holophane Ltd. Outside there were Giro Sign frames with stills from the films. The neon at the top of the building was in blue and red. The first projectionist, later to become manager was a Mr Ivor Bakewell.

On 4th March 1955, CinemaScope arrived with the screening of “Lucky Me” starring Doris Day. In December 1967, Wedgewood Cinemas chain became the owners and it was soon re-named Wedgewood Cinema. It was sold to Mecca Leisure Ltd. in 1974. Mecca sold to Parker’s leisure in 1981. The last film screened under Mecca was “Gone With The Wind”.

The theatre closed for a year - re-opening as a part time cinema and bingo hall. Films were screened on Saturday afternoon and Sunday, Monday and Tuesday evening. The bingo became known as ‘Palace’ bingo. After a year Parker’s stopped running film and turned it into full time bingo. Later, the hall was run by a Mr Chris Davies as a social club. Finally Graig Holmes ran it as a snooker hall which had closed by 1992. Projection equipment was Kalee 21’s, which were saved by a Mr Roger Shone. The building was demolished to make way for car parking in the 1990’s.

Contributed by DAVID A ELLIS
Get Movie Tickets & Showtimes