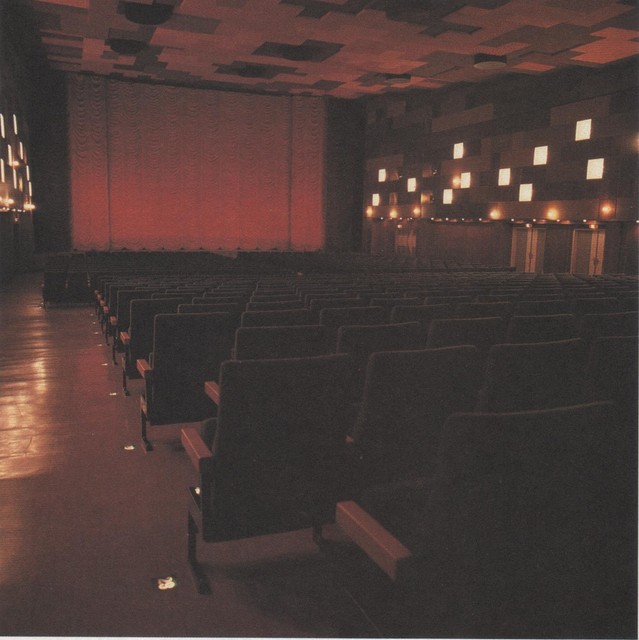 The Gartenbau Kino opened in 1919 with 900-seats. In 1953 it was remodelled to the plans of architect Robert Kotas when CinemaScope was installed. It was re-modelled in 1960, re-opening on 19th December 1960 with Kirk Douglas in “Spartacus”. From 1st November 1962 until 12th December 1963, it operated as a 3-strip Cinerama Theatre. From 17th December 1971 it presented 70mm films and was equipped with 6-channel Dolby Stereo sound. However the screen was considered very small compared to other such installations around the world. In 1973 the European Premiere of “Schindler’s List” was attended by Steven Spielberg. In 1986, it was listed with a seating capacity of 760, with all seating on one level.

Today, the current seating capacity is for 736 and it is the largest cinema operating in Austria. There are square lighting panels which are randomly placed on the chequerboard side-walls and there is a chequerboard ceiling. There is a beautiful festoon curtain over the screen, which I believe rises, rather than draws across.

Films tend to be the latest blockbusters and art house films, all shown in their original language. It is one of the venues for the Viennale - Vienna International Film Festival.

In 2021 it received a 3.3 million Euro complete renovation/restoration, reopening in October 2021. The magnificent 30 years old red & gold festoon curtain was cleaned and restored. The cinema has retained its 70mm/35mm projectors.

The Gartenbau opened on December 19th 1960 with Stanley Kubrick’s SPARTACUS (in 70mm!), Kirk Douglas was in attendance with his wife Anne Buydens. It was the first theatre in Austria to be equipped with a 70mm screen and projectors (DP70). It had 900 seats. It was first adapted into a 3-strip Cinerama theatre in May of 1961, a suitably curved screen was installed in front of the 70mm screen, reducing the seats to 840. WINDJAMMER was the first 3-strip film to be shown (in Cinemiracle) and the longest-running feature (37 weeks). Further films utilizing the 3-strip technology were not shown until November of 1962.

Dec.17th was the premiere date of FIDDLER ON THE ROOF, about the 50th film shown in 70mm at the Gartenbaukino.

In the same year the curtain still operating today was installed. It is indeed a horizontal curtain, to my knowledge the only one of it’s kind still operational in Austria today.

The architect responsible for the Gartenbau was Robert Kotas, who conceived, built and renovated over 40 cinemas all over Austria. More on him at another time…

Several Films of the Viennale are shown in the Gartenbaukino.