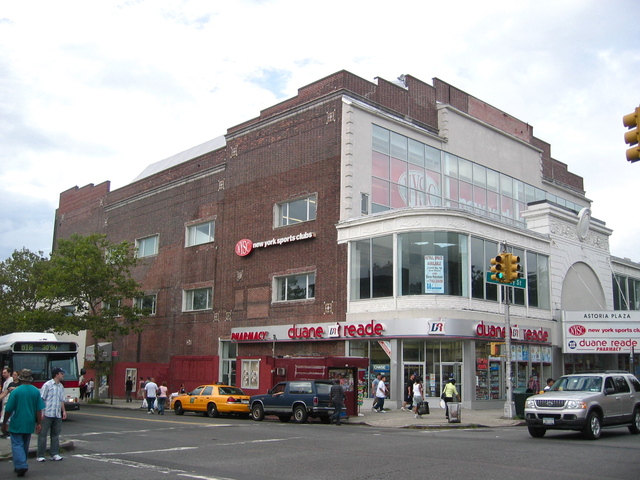 The Astoria Theatre opened in the Astoria section of Queens in November 1920, as a vaudeville house for the Glynne & Ward circuit, but acquired by Loew’s Inc. on January 8, 1923.

After many years operated by the Skouras Theaters Corp. chain. On March 18 1977, United Artists divided the theatre into four screens, and then, on March 28, 1986, converted the remaining dressing areas in the back of the building into two additional theatres, bringing the theatre up to sixplex status.

It was named the UA Astoria Sixplex when it closed on December 26, 2001.

Today, the former theatre building is used for office space and retail.

Can somebody please tell me where the Crescent Theater was? I’ve lived on Crescent Street just about all my life, and haven’t any idea where this theater was. (There was the Strand Theater on Crescent and Broadway, which I remember quite well.) Also, does anybody remember the small movie house on Steinway Street across from the old Loew’s Triboro but further toward Astoria Boulevard? (I believe it’s original name was the Cameo. I’m not sure I remember it as such, but I do remember it as the Olympia, which became a porn theater before it closed. Not sure of the year it closed, either.) Thanks.

On Monday 5 March 1951, Bela “Dracula” Lugosi presented his in person Horror and Magic Stage show at Skouras Astoria. Currently I am conducting research on all things Lugosi; if anyone out there actually saw this show and/or has memorabilia (poster, handbill, photos) related to this show, please contact Bill at Thanks in advance for any assistance!

I posted a bunch of grand opening ads for the Loew’s takeover of January 8th, 1923.

This theater had almost nothing left of the original ornamentation left by the time it had closed. In the later couple of decades, it was stripped down pretty hard, with everything being covered in matte or shiny black paint.

The only somewhat interesting elements left were the spiral stairs leading to a round landing, the bathrooms and the upper theaters. Mind you, the theater was also cut up into multiplexes a number of times with what would appear to be slicing these upper theaters from what would have been balconies into their own screen suites. For many years it was a quad, until two more screens were added in the back of what must have been admin spaces.

Also, the final marquee was replaced after a quite significant collapse of the 60’s vintage “box” marquee, which I recall may have also have resulted in injuries, and an eventual complete rebuild (as you can see, they added struts to the final marquee, even though it was much smaller), so there were a number of changes to that…

2002 article about the closing.

Another news article on closure in December, 2001 can be viewed here