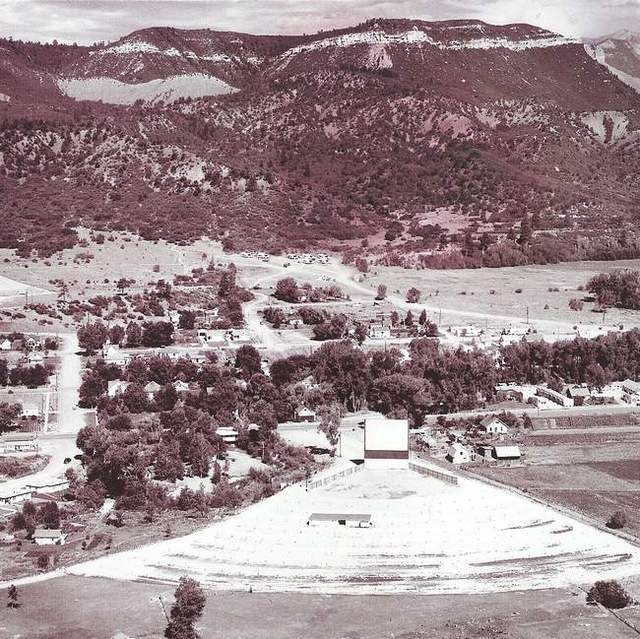 Found it. Just south of 2390 Main Ave. according to the 1971 Topography Map. No trace of the drive-in left as the property is now a baseball field and sports complex. Interestingly enough, the locations of both the Rocket & Bell drive-ins were next to running tracks. https://goo.gl/maps/LLGq1

I’ve been told stories about the Bell Drive-In. People snacked from nearby apple trees and alcoholic drinks were served. Hot toddies were popular. I’m sad I missed it. 🍹🍸

While in business, the Rocket Drive-In wasn’t near a running track. That happened when a new school was built and when The Rocket was closing. When The Bell was open, it was next to a horse track though. The La Plata County Fairgrounds. And the building seen in the photo, is also a new high school which opened in 1977.

Bell Drive-In was open in 1959, according to a date on post card I have showing the site, but it may be under construction. Probably a lot of Fort Lewis College students frequented, as the school opened in Durango in 1956.

I think the date is definitely wrong. Looks like it was open circa 1950 and possibly before that.

“John Wallace has taken over operation of the Belle Drive-In at Durango from former owner Ted Knox”. — Boxoffice, April 11, 1960

In the May 2018 issue of History La Plata, Charles DiFerdinando wrote, “The Basin Drive-In Theatre opened at 2300 Main Street on June 23, 1950 with the feature film, "Oh, You Beautiful Doll”.