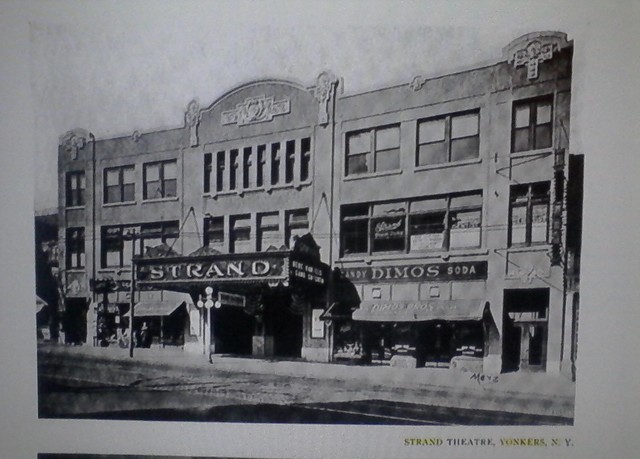 A conversion of a First Reformed Church with was opened as New Strand Theatre on March 2, 1922 with Mary Pickford in “Little Lord Fauntleroy” . It was closed on August 31, 1957 with Jerry Lewis in “The Delicate Delinquent” & Jack Palance in “The Lonely Man”. It became a live theatre named Yonkers Playhouse. It was demolished in 1968

The Strand Theater opened on March 2, 1922. The new theater (architect, H. Lansing Quick), at the request of the developer, former Mayor Michael J. Walsh, incorporated the auditorium of the old First Reformed Church (opened 1896) as well as the main room of a building in the back of the property that had been the church Sunday school and before that, the city’s first high school. The theater also managed to incorporate the oak ceiling of the church. 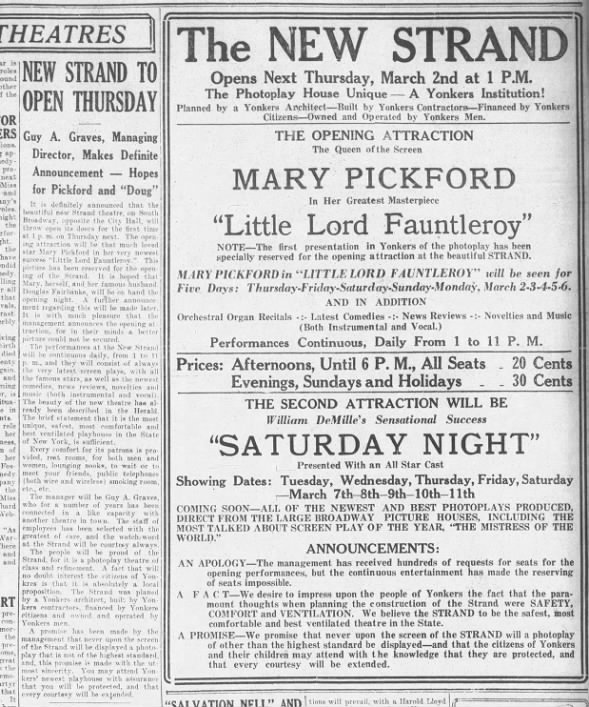 The venue launched as the First Reformed Church in the 19th Century and was converted to the Strand in 1922. Publix introduced sound there on March 1, 1928 with the live performers and house orchestra all dismissed for the advent of sound film in Yonkers. The Strand closed with as a sub-run double feature house on February 28, 1954. But a new operator was identified and the theatre converted to widescreen at its relaunch on May 29, 1954.

The Strand closed for good with movies on August 31, 1957 with a double feature of Jerry Lewis in “The Delicate Delinquent” and Jack Palance in “The Lonley Man.” From 1963 to 1965, it was known as the Yonkers Playhouse with live stage plays. That proved to be a failure.

The impact of the Beatles was so great that the venue rebranded, finally, as the House of Liverpool Theatre for two weeks beginning on April 3, 1966 with Peter and Gordon live in concert. Other concerts included Frankie Valli and the Four Seasons, Jay & the Americans, Chad & Jeremy, Gene Pitney. The House of Liverpool signage was seen at the former Strand’s demolition in 1968. Interestingly, that razing revealed the remnants of an 18th Century church at the theater’s rear.

(Opinion: This listing should be known as the Strand Theatre – its final operating name as a movie house as opposed to the more obscure final two live, non-cinema names.)