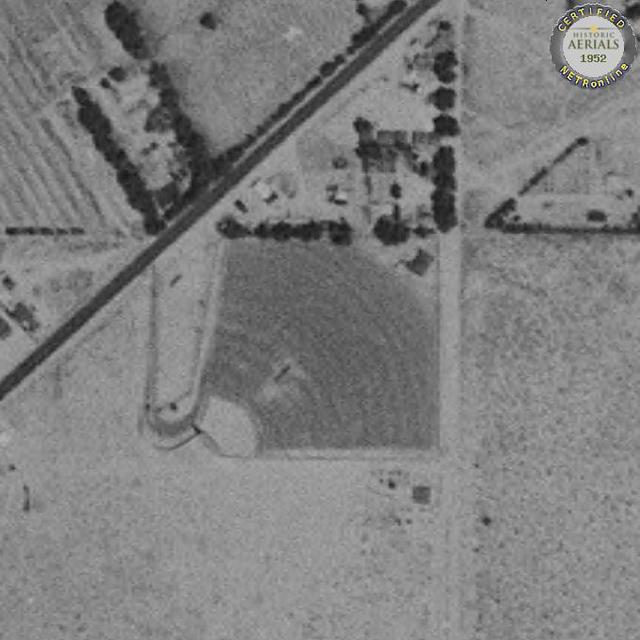 Located in Lenwood, near Barstow. The Bar-Len Drive-In was opened on December 29, 1948 with a capacity for 500-cars. It was part of Western Amusements in 1955. It was closed on September 15, 1968 with Walter Brennan in “The One and Only, Genuine, Original Family Band” & Walt Disney’s “Bambi”.

Update: The drive-in is now the intersection of Lenwood Rd. and Main St. literally! The reconfigured Lenwood Rd. runs through where the drive-in stood. Most ramps are still visible.

The “Bar-Len” was listed in Lenwood in the 1964 Film Daily Year Book. It was also listed, with a capacity 460 cars and in Barstow in the 1972 International Motion Picture Almanac, so it survived until at least 1971. By the 1984 edition, it was gone.

A 1963 Barstow High School yearbook photo calls it the “Bar Len,” though the poster uses a hyphen.

For the clincher, this Flickr user posted “A single frame from the policy trailer shown at the Bar-Len Drive In.” It clearly shows a hyphen in the name.

I can’t tell which city it belonged in, but I think the name really ought to be hyphenated.

The Bar-Len first appeared in the Film Daily Year Book in the 1950 edition. It was also in the first Motion Picture Almanac drive-in list, the 1950-51 edition, and the second Theatre Catalog list, 1949-50.

But the “Barlen” was still included in Western Amusement’s holdings in the MPA’s Theatre Circuit section through 1984.

Newspaper listings for this drive-in stopped in 1968 in the Desert Dispatch.

To amplify that excellent catch, the Bar-Len’s final performance was on Sunday, Sept. 15, 1968, when it showed “The One and Only Genuine Original Family Band” and “Bambi”. Subsequent ads were “Closed for the winter”.