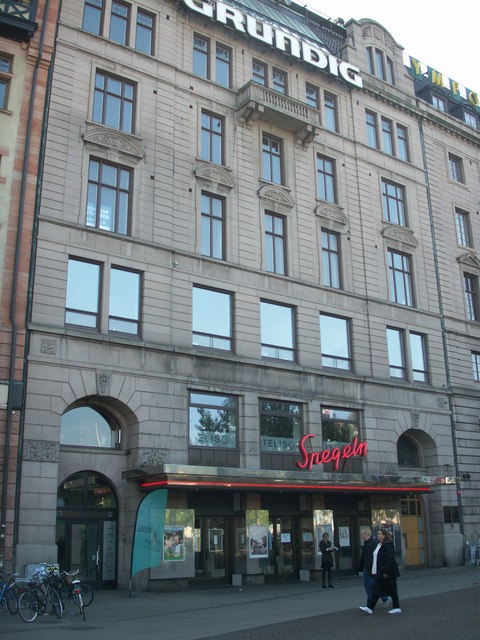 Located on the main square in the centre of Malmo. The Alcazar Cinema opened on 5th November 1934 with a seating capacity of 556. Designed by architect Carl-Axel Stoltz, it was a conversion of space in a former bank building from the 1910’s, which had been designed by his father August Stolz, who also designed the nearby Palladium Cinema.

On the 20th August 1954, it premiered the first Cinemascope film to be shown in Malmo Richard Burton in “The Robe”. Operated by SF from 1961, in 1971 they commissioned architect Lennart Clemens to ‘modernise’ the cinema and it was re-named Camera Cinema, re-opening on 21st September 1971 with Alan Bates in “The Go-Between”. It was closed by Svensks Filmindustri on 4th April 1995 with a Whoopi Goldberg comedy film.

On 19th December 1998 it was re-opened by independent operators as the Spegeln (Mirror) Cinema, taking its name and the actual neon name sign from the original Spegeln Cinema in Malmo, which had closed earlier that year. It re-opened as a three screen cinema, with seating capacities of 167, 64 and 63.