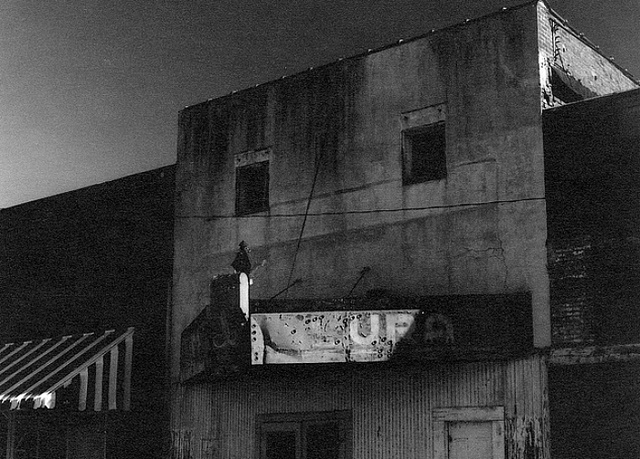 The Lura Theatre was opened in 1916. It was closed in 1982. In 2014 it was announced that a new owner of the building was planning to restore it.

The Lura Theatre is listed on the historical register in Arkansas as part of the Augusta Downtown District.

Boxoffice of August 1, 1977, had an item about Marjorie Malin, then operator of the Lura Theatre. It mentioned that her father, W. E. Malin, had opened the theater in 1916.

The Lura Theatre is mentioned in many issues of Boxoffice, and was long operated by Marjorie Malin’s mother, Lura Malin. She is first mentioned as operator of the theater in 1950. Prior to that, W. E. Milin was the operator, so he might have died about that time, though I can’t find a death notice for him in Boxoffice. A brief notice of Lura Malin’s death was published in Boxoffice of February 26, 1968.

A single line in Boxoffice of October, 1982, read: “The Lura Theatre, Augusta, recently closed.” I’ve found nolater mentions of it.

I finally found an item about W. E. Malin’s death, in Boxoffice of March 11, 1950. He was killed in an automobile accident on March 8 that year.

The Lura was operated by W.E. Malin’s children – Marjorie and Billy Malin, both of which has passed on. Billy was my uncle by marriage and I have a number of fond memories as a child at the theater – and watching and learning how it was operated. I remember in the early 70’s a fire caused the theater to be closed shortly for cleanup and remodeling. If you have other specific questions, I can contact fellow family members to fill in any blanks.

While the renovation is pretty nice (windows replaced upstairs, freshly replastered façade, redone entry), the marquee has been slathered in black housepaint, which takes away a lot of the character.