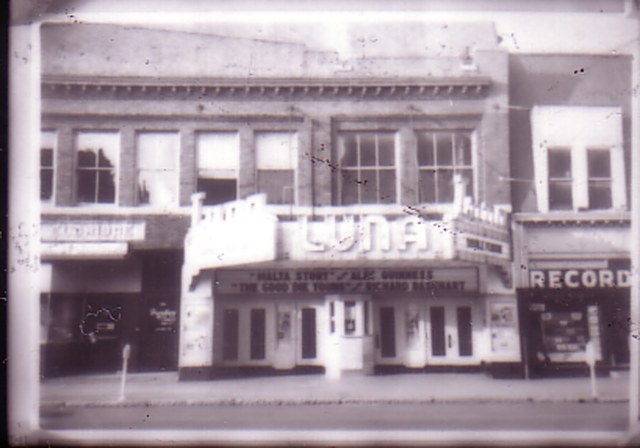 Opened in 1918, the Luna Theatre was originally operated by the Luna Amusement Company, which later opened the much larger Mars Theatre in 1920 (today’s Long Center for the Performing Arts).

I purchased and removed the Wurlitzer from the Luna Theater many, many years ago. It was mostly destroyed by vandals by the time I got there.

Dear gorhamzoro, could you please provide more details on the Wurlitzer organ you got from the Luna Theatre?

Was this the model E Special, Opus 1154, shipped from the Wurlitzer factory on September 9, 1925? (That is the organ listed for this theatre on the TheatreOrgans.com list of original theatre organ installations).

What made it a “Special”? was the organ divided (two chambers, more normally called a model “EX”), or did it have more percussion effects, or a special-order pipe rank substituted for one of the standard pipe ranks, or ???

What happened to the remaining parts of this organ? Do you still have them, or did you sell them to various people? I should send you an email since you probably won’t see my post here for quite some time.

Also, do you have any information on the Seeburg-Smith organ that was installed at the Luna Theatre before the Wurlitzer? I am about to make another post detailing what little I know about this instrument, but I’m curious to know what happened to it after the Wurlitzer was installed. Was it taken in on trade to Wurlitzer, or sold to another theatre or a church?

Are, or were, there any Smith organs installed in churches in the greater Lafayette area? Thanks!

According to “The Encyclopedia of the American Theatre Organ” by Mr. David Junchen, pg. 629, a Seeburg-Smith theatre pipe organ was installed in the “Luna Th.” in Lafayette, Indiana, in 1918. This organ had Kinetic blower serial #F462, which was a 2 horsepower blower. No further details on the organ, such as size (# of manuals / # of ranks), or the static wind pressure of the blower, are given in the book (not known at the time of publication).

It is known that Wurlitzer installed a style “E Special” (special/customized version of the style E, which was a two-manual, seven-rank theatre pipe organ) in this theatre in 1925, presumably replacing the earlier Seeburg-Smith instrument. User gorhamzoro was directly involved with the removal of the remains of this Wurlitzer organ and would/will know more about it.

However, it is not known (at least to me) what actually became of the Seeburg-Smith organ. Was it sold to another theatre, to a church, to a lodge hall, to a private home, or to a mortuary? All of these are possibilities.

The other possibility is that it was simply junked at the time, but this doesn’t seem as likely to me as having happened in 1925, since organs were still viable in theatres and used at that time, and thus had value.

Does anybody know where this organ, or its parts, is today? Thanks!

Uploaded a photo from fadingpastime.blogspot.com

Still In Operation Since 1956.