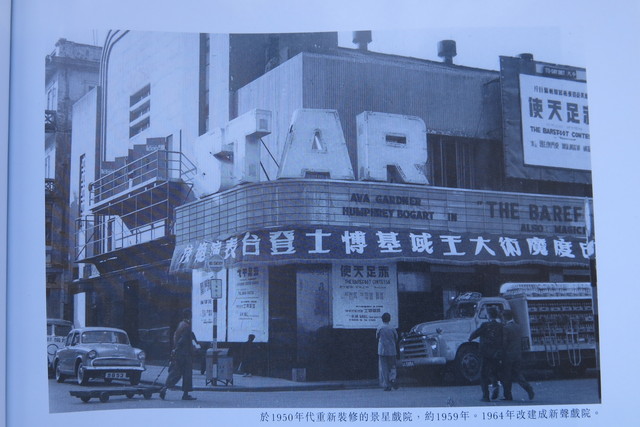 The Star Theatre was located in Tsim Sha Tsui on the Kowloon side of Hong Kong. It opened on 1st June 1922.

It published a monthly house magazine from 1951 to 1953. The magazine listed all films showed during the month. The films were categorized and synopsis of each film was provided. Lyrics and scores for selected songs were also provided.

The Star Theatre was closed on 1st December 1961, and was demolished.

According to the advertisement published by the 1st June,1922 edition of the Hong Kong Telegraph,the films to be shown by the Star Theatre on its opening day included Jane Goes A-Wooing and the 1st and 2nd episodes of the Great Radium Mystery.

The Sands Theatre was built on the site of the Star Theatre.

Does anyone know the theatre’s name in Cantonese?
I remember seeing Trapeze there (Burt Lancaster/Tony Curtis/Gina Lollobrigida)
Picture of the Star theatre:
http://www.flickr.com/photos/old-hk/3007315707/

Supplement:
The cinema was a venue for stage performances in 1924.
From 1925 through the outbreak of war on 8th December,1941,the cinema showed selected films at reduced prices.
During the war years,the cinema was not in business.
0n 4th April,1931 Gloria Swanson’s What a Widow was shown as its first talkie.
After the war,the cinema was expropriated by the British Armed Forces. The cinema re-opened on 1st January,1946 as the ENSA Star Theatre,and was run by the Department of National Service
Entertainment. In the second halves of 1946,the cinema was run by the Combined Service Entertainment, and the cinema was re-named as the Star Theatre.
In June 1947,the cinema had been returned to its landlord and re-opened in 5th September,1947 as a cinema showing selected artistic
films.
In the mid-1950’s, selected Mainland China films were shown.
In 1956,the cinema was bought by the owner of the Roxy Theatre. The cinema closed on 8th November, 1956 for extensive renovation and refurbishment. The cinema re-opened on 21st December,1957
with “Alexander the Great” as a first run theatre and paired with the Metropole Theatre in North Point on the Hong Kong Island until 31th August,1959.
Before its closure on 1st December,1961 for redevelopment,selected Mainland China films were shown.
Raymond Lo[Suwanti]