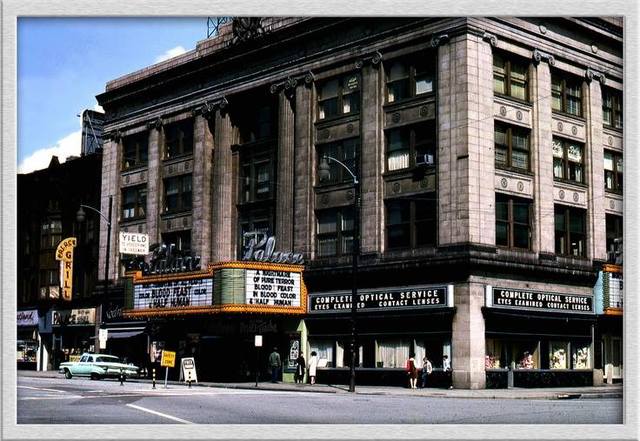 The Keith Albee Palace Theater was located at 5 Wick Avenue at Central Square in the heart of downtown Youngstown, Ohio. The theater opened on March 16, 1926. The opening act was Betty & Burt Wheeler, an outstanding dance and comedy team of the 1920’s plus Greta Garbo in “Torrent” on the screen.

In 1928, the theater converted to sound equipment and as vaudeville faded into the past, the Palace Theater still retained a steady billing of live entertainment including the Tommy and Jimmy Dorsey Bands, The Glen Miller Orchestra, Paul Whiteman, Horace Heidt, and others.

A Neo-Classical style building, the theater had many unique features including an underground tunnel linking it with The Tod Hotel across Central Square.

The theater closed on Sunday, November 29, 1964. The closing picture was “First Men In The Moon”. The lavish interior appointments were dismantled and sold at auction prior to demolition in summer of 1966.

I remember seeing many great movies and “stage shows” at the Palace, back in the 1940’s & 1950’s. That was the big-band era, and many of them played the Palace, where I seen many of them. Count Basie, Duke Ellington, the Dorsey Brothers, Charley Spevak, etc., etc. And in later years, about 1958 to early 1960’s there was a group of us who hung-out at Rodney-Ann’s, sandwich & coffee shop. We, for the most part, attended the local college (YU/YSU)and some of us had night classes. Rodney Ann’s had great sandwiches, coffee, and ice-cream. Rodney-Ann’s was located to the left of the Palace Theatre (as you entered the theatre), and there were the large glass doors where you could exit from the Palace into Rodney-Ann’s, but not the reverse. The Palace was a very beautifull theatre, with a majestic lobby, and a series of really fine balaconies on the upper levels. To most locals, at that time, they mourned it’s destruction. And it appears that the downtown Youngstown never did recover. And so it was!!

But lets just leave it at that and read the Vindicator report of the event:

The Palace Theatre did indeed have a Pipe Organ, and as posted, it was a Wurlitzer Style H Special. A Style H meant that it contained 10 ranks of Pipes. However, the Palace had 11 ranks, thus the “special” designation. The 11th rank was an additional Vox Humana set of pipes that were installed next to the projection booth in its own chamber. When the organ was removed in 1964, I don’t believe that this 1 rank Echo Division was removed.

The organ was scattered across the country. I spent nearly 10 years re-assembling it with either the original components or identical from other Wurlitzer organs.

The organ is installed at C&C Ribbon Company, 8204 South Avenue in Boardman. It is installed and plays daily, either by hand or via a MIDI computer system. For the past 5 years, C&C has an annual Christmas Open House Thanksgiving weekend, usually with a silent movie on Saturday night and 5 mini concerts on Sunday, running from 12-5. Artists have included many national and international performers as well as local organists.

Of course,in the theatre, the instrument was installed on either side of the prosidium arch in 2 chambers with grillwork across the front. In the store, the organ is installed in a single chamber. The facade on the organ is a solid mahogany case featuring a hand carved floral motif and dummy facade pipes. It was carved by 3 French Canadians (their signitures are inside the case). This case was originally built for the 1904 St. Louis Worlds Fair for the Los Angeles Art Organ Company. It was intended for a self-playing residence instrument whose sale never materialized. At the fair, the facade was sold to the Wirsching Organ Company of Alliance, Ohio. Wirsching used the facade for a new instrument they built for the original Grace Lutheran Church, whose original building still stands (2014) on West Rayen Avenue. I purchased the Wirsching instrument, mainly for the facade for use on the Wurlitzer.

If you get a chance, stop in at C&C and hear the organ. It will take you back in time. If you have any additional questions, about this or any other Youngstown Pipe Organ, feel free to email me!

Thanks for your post and bringing the organ back to the valley. Feel free to add some photos of the organ here.

wolfgirl500 – I finished the book on my aunts. If you would like to see it go to www.blurb.com and search for Burke Sisters. It is open so you can see each page.

Thomas Lamb was the architect of the Youngstown Palace.

In the period between 1912 and 1918 there was another unrelated Palace Theater that was located at 11 East Federal Street that I will be posting and in order to prevent confusion between the two,I will be calling it “The First Palace”.

The mezzanine of the Palace was a $100,000 art gallery right up to the last day of the auction before the building was demolished.

Facebook link with the Palace at the head end of the video.