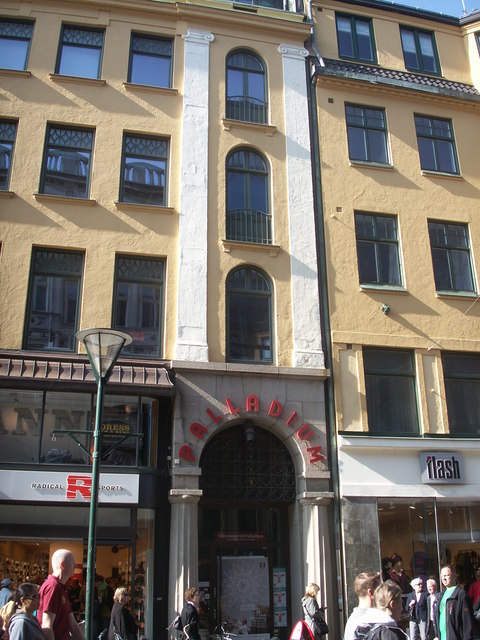 The Palladium Biograf opened on 26th February 1920 as a cinema and concert hall. It was designed by noted architect August Stoltz in a mix of Neo-Classical and Baroque styles. The cinema must have one of the most narrow street facades in the world, being only a doorway wide.

There is a long corridor which leads to the foyer and auditorium block which is located at the rear of the building. It was the most sumptuous cinema to open in Malmo.

The main foyer has marble columns and decorative fresco-work. The balcony foyer has beautiful decorative mirrors on the walls, gilded furniture and a painted fresco on the ceiling, which has a central chandelier, and there is an enormous oriental carpet on the floor. Inside the auditorium, seating is provided in orchestra and blacony levels, with a small loge seating area. The arched ceiling is constructed in reinforced concrete and has paintings by Berlin based artist August Unger, representing Antiquity, Middle Ages and Modern Times, plus medallions and figures symbolising the fine arts, industry and transport. There are four enormous crystal chandeliers in the main ceiling, and thirty smaller chandeliers hanging along the side walls. The square proscenium has a red silk ‘waterfall’ curtain which rises.

The Palladium Biograf was renovated in 1943 and again in 1954, when it had Sweden’s largest screen (at that time) installed. Taken over by SF (Svensks Filmindustri) in 1975, it closed as a cinema in 1996.

Today, the Palladium is well looked after and cared for as a concert venue, with occasional live performances. Several times a year, it is also a venue for film festivals, but all equipment has to be hired and brought in, as the original projection equipment was removed back in 1996.

A two-page article about a theater in Malmo called the Palladium begins on this page of the February 28, 1925, issue of Exhibitors Trade Review, but the article says that this Palladium Theatre was built in 1918-1919, so it must have been an earlier Palladium that we don’t have a page for yet. There are three interior photos.

Joe;I made a typo, I have corrected the opening date to 1920.