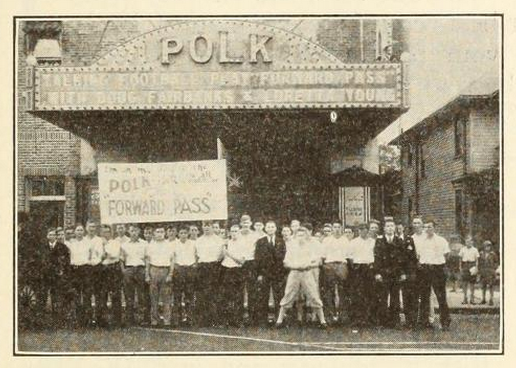 Built in 1927 to the plans of architect James E. Casale, the Polk Theatre has a mezzanine, a high balcony, a permanent backdrop of a "Venetian piazza," an orchestral pit, high twinkling stars, a cloud-covered ceiling, and an exquisite terrazo floor. The air-conditioning system (the first in the county in the 1920’s) was a pump that used artesian well water to chill the building.

The Polk Theatre opened on December 22, 1928 with Pauline Frederick in “On Trial”. By 1941 it was operated by Paramount Pictures Inc. through their subsidiary E.J. Sparks

Today, the 1,400-seat theatre is used for live performances as well as movies.

The new marquees etc. are just fantastic compared to how this theatre’s exterior looked in 1988. Complete transformation!

In fact, the entire building was transformed with the lovely addition of awnings, etc. I wish more downtowns made use of storefront awnings rather than see them turned into a rusty place for bird’s nests.

I’ve visited this theatre and it is a must-see when in Lakeland FL.

The Polk Theatre is doing a documentary about the Elvis performance in 1956. They are searching for people who attended the concert.

It looks like the Polk Theatre had to be partly rebuilt twice before its opening in December, 1928, which may account in part for the original builder, John Melton, running out of funds. An article in the October 6, 1928, issue of Exhibitors Herald reported on the damage done to the region’s theaters by a recent hurricane. Several movie houses were severely damaged or completely destroyed, but the line about the Polk says “…the Polk at Lakeland lost its roof — for the second time.”

Scotty Moore’s website with many images of the Polk Theater. Studio & touring guitarist for Elvis. Coincidentally August 6, 1956 at the Polk.

David, A great link. Had to cut and paste then view the extensive info and fabulous photos. Thank you.