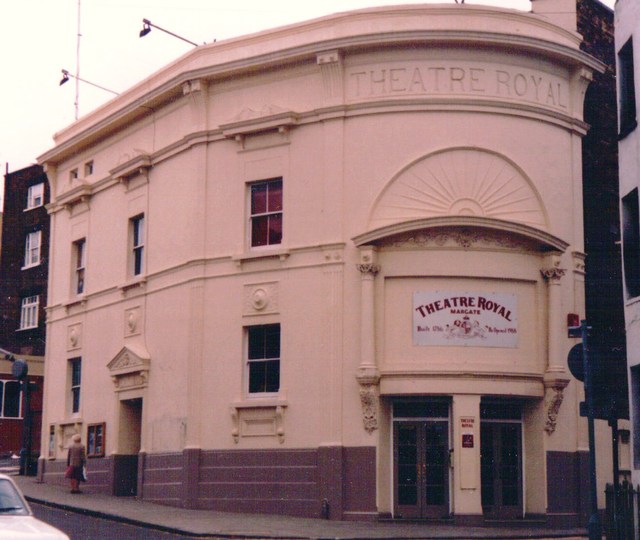 The Theatre Royal is Britain’s second oldest operating theatre, after the Theatre Royal, Bristol(1766). The Margate Theatre Royal was opened on 27th June 1787 with a production of "She Stoops to Conquer". The original architect is unknown, but it was extensivly re-modeled in 1874 by architect Jethro T. Robinson, who later became father-in-law, to famed theatre architect, Frank Matcham. The newly enlarged theatre now had a seating capacity of 700.

There are two horse-shoe shape balconies, supported by slender iron columns. The eliptical shaped proscenium arch is 22 feet wide and the stage, which today retains some of its original machinery, is 21 feet deep.

The Theatre Royal has had many managements and openings/closings over the years. From 1915-1930 it was used as a furniture storage facility. On 16th January 1933, it became a cinema and was re-named Kinema Royal. A projection box was built on the stage, allowing for a rear projection system, and a British Thomson-Houston(BTH) sound system was installed. But this was a short lived venture of only eleven months. Professional wrestling then took to the stage until March 1934, when live theatre use resumed.

The Theatre Royal was closed in January 1940, due to war-time conditions, and didn’t re-open until 17th July 1948. Plays were brought in, but this was not a success and the theatre went over to staging nude revues and male ‘drag’ shows until 1955. Plays returned to the stage again under various managements until 1978.

The Theatre Royal was converted into a bingo club in the mid-1960’s and this continued until 1985. The current owners; Margate Theatre Royal Trust, were founded in 1979 and they operated the Theatre Royal as a ‘members only’ theatre club, therefore avoiding some licencing requirements. It re-opened as a full time public theatre early in 1998.

The Theatre Royal is designated a Grade II* Listed building.