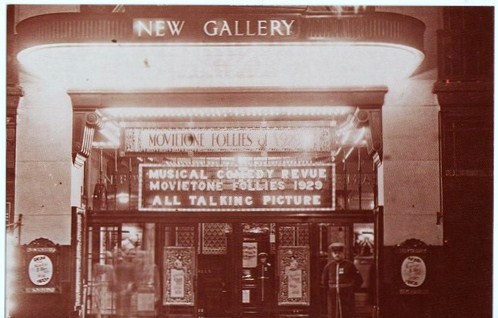 An important survivor in central London’s Regent Street, the New Gallery Cinema was originally built in 1888 as an art gallery, it became the New Gallery Restaurant in 1910, converted to plans by architect Frank T. Verity. This did not last too long as it was converted into a cinema to the plans of architects William Woodward & Sons, opening on 14th January 1913 as the New Gallery Kinema. It was closed on 4th July 1924 as all was to change again, when it was radically altered and enlarged by architects Nicholas & Dixon-Spain re-opening as the New Gallery Cinema on 12th June 1925 for the Provincial Cinematograph Theatres(PCT) chain. The opening film was “The Lost World” starring Wallace Beery & Bessie Love.

There is a spectacular Greek frieze, 256 feet long running along the walls which was the work of artist Gertrude Halsey. A Wurlitzer, Model ‘F’ 2Manual/8Ranks theatre organ was installed with the pipes concealed in two chambers on the right-hand side of the screen. It was the third Wurlitzer organ to be installed in the UK, and the first in the West End of London. It also became the first organ to be broadcast and the first to be recorded. The opening solo organist was Jack Courtney. Another ‘first’ for the New Galley Cinema was the first installation of a Western Electric(WE) sound system in the UK. The projection box was located at the rear of the centre dome in the auditorium ceiling, which created a very steep throw onto the screen.

The 1,450 seats were split between stalls and single balcony. It became a noted cinema for the premieres of the Walt Disney cartoons in the 1930’s (“Snow White and the Seven Dwarfs” ran for over nine months in 1938).

However it was slightly off-West End and after the war struggled for business. When the Seventh Day Adventist Church made an offer for the building in 1953, Gaumont British Theatres, who by then owned the building, were happy to sell. The New Gallery Cinema was closed on 13th September 1953 and avoided being altered for Cinemascope. The church retained all cinema facilities for the occasional showing of religious films and although modernization was carried out, no major alteration to the auditorium has ever been attempted.

In the 1990’s, the church moved out and the building stood empty and unused for over 10 years. The building was converted into a Habitat furnishings store in 2006. Most of the original cinema decoration has been retained and restored, and the original Wurlitzer organ had been renovated and was played to shoppers on certain days of the week. However this was halted in 2008. In December 2010, the Wurlitzer organ was played again, but there was doubt it would be a long standing engagement, as Habitat closed on 19th March 2011, with organist Richard Hills playing the instrument for final time(for now) on 5th March 2011.

In September 2012, it re-opened as a high-end Burberry clothing store. The Burberry store has less clutter than the former Habitat store, which allows the auditorium to be better viewed. There is a large screen forward of the original proscenium, upon which plays vintage silent film clips together with Burberry (silent) promotional films. Unfortunately, the Wurlitzer organ console has now been stowed away in a small storage space behind the screen. It receives an annual service every December and is in excellent condition.

The New Gallery Cinema is a Grade II Listed building.

Concerts on the Wurlitzer resumed in December 2010 and it is currently played on the first Saturday of each month at 4pm. However, Habitat have announced that the store will be closing down on March 19th 2011 and thus the building faces an uncertain future.

video of a recent performance of the organ
http://www.youtube.com/watch?v=MXTzDvhYwX4

http://www.theatrestrust.org.uk/news/show/3208-former-new-gallery-cinema-regent-street-to-be-converted-for-burberry but it had a balcony.

Hi all, it has come to my attention that a company called sq-m2 Ltd (Square Metre), actually did a refurbishment prior to 2006, for the Crown Estate of the New Gallery Cinema / auditorium!! Strip out of finishes, light restoration, works to the mezzanine balcony areas, new ballustrades etc.
This was BEFORE the Habitat conversion in late 2006, c. 2004/5. Should really put that into the Wiki…

Seems this theatre is to re-open in the near future according to London’s Evening Standard newspaper. I hope it is true.

Hi Yes I saw this on the BBC last week and sent it to the News items on CT but it never made it onto the site!

Robbie25646 & rasLXR; The former New Gallery Cinema is NOT going to re-open soon. Since September 2012, it has become a Burberry clothing store.

You are confusing the New Gallery Cinema with the former Cameo Poly Cinema (listed on Cinema Treasures as the Regent Street Cinema) which is located at the northern end of Regent Street, which has just been awarded Lottery funding to be refurbished and re-opened as a cinema in the future.

Have a Victor 78 Recording of Reginald Foort playing “In a Persian Market” sometime before 1939. Will try to post.

I have a recording of the New Gallery Cinema Wurlitzer played by Claude Ivy with Jack Hylton’s orchestra, dated 11 November 1927, if anyone is interested I’ll feature it on my podcast to be uploaded 26 Feb 2015 (which will be available to download during the next 2 years).

Interior photos from January 2019 trading as the Burberry Store, with much of the original architecture on show:–