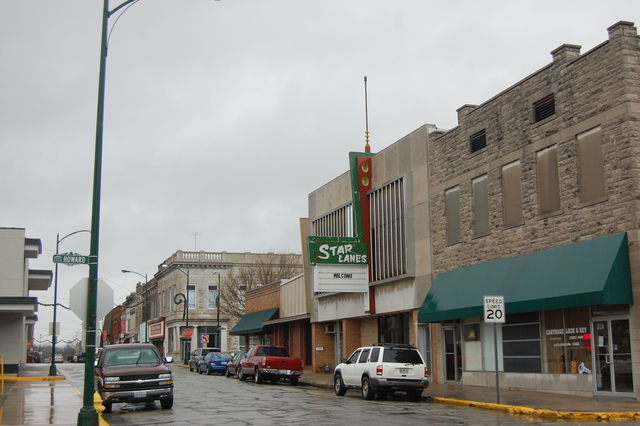 The Crane Theatre was opened July 19, 1922 and was designed by architect A.C. Michaelis. It was renamed Fox Theatre and was remodeled by architect Samuel W. Bihr Jr. in 1955. It was closed in 1960. The former theatre is today home to a bowling alley.

The Crane Theatre became the Fox Theatre in 1955, replacing Fox Midwest’s Tiger Theatre which had burned the previous year. The building was extensively altered and given a Midcentury Modern style by architect Samuel W. Bihr, Jr. Before and after photos are on display in this article in Boxoffice of October 22, 1955. Many additional photos appear on the three subsequent pages.

There’s a bit of information about the history of the Crane Theatre in this item from a Carthage Press weblog. It says that the house opened around 1922, and had a Hope-Jones organ.

The 1955 Boxoffice article I linked to earlier is now available starting at this link. There are additional photos on the three subsequent pages.

Joe Vogel none of your links are working now but 2 years ago I copied the article on to a private group of people from Carthage. I will try to post them here. Thank you for your research.

I posted them on the photo pages.

Idc402000: Thanks for posting the article. My Boxoffice links have been broken twice as the magazine has moved from one site to another and then changed its own urls. The links to pages at issue.com are gone forever, but I’ve found that the links to the magazine’s own web site can be fixed by going into your browser’s address bar and replacing the part of the url that says- www.boxofficemagazine -with- pro.boxoffice -while the remainder of the url remains the same.

Carthage Press has apparently removed its weblog section altogether, but that particular page has been preserved by the Internet Archive’s Wayback Machine, though without the photo that accompanied the original text.

An article in the January 27, 1922, issue of The Joplin Globe concerning an event that had taken place on November 21, 1921, indicated that the Crane Theatre in Carthage had at that time been under construction. It most likely opened in the early part of 1922.

Comparing the B/W photo that includes the Hollywood Cafe with the burn photo of the Roxy you can see the window and brick patterns on the front wall are the same. I put one picture above the other so it would be easy to compare. 6 storefronts to the east would be where the Roxy was, ant whatever the theater was previously named.

An item from the March 4, 1922, issue of The Moving Picture World was published rather late, if the item from The Joplin Globe suggesting that the Crane Theatre was already under construction in November, 1921, as cited in my previous comment, was correct:

The Crane Theatre would have been one of the last projects designed by architect A. C. Michaelis, who was killed during the construction of Joplin Memorial Hall in 1923.

“CARTHAGE, MO. – The Fox Midwest Theatre Building at 219-221 East Third St. has been purchased by three Springfield business men who said they have no plans to operate the building as a theatre. The Fox was remodeled a few years ago but has been closed several months.” — Boxoffice, June 20, 1960