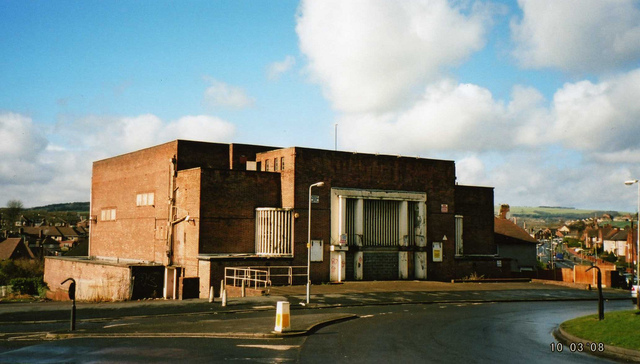 The Ritz Cinema was built on a prominent site at the junction of Southey Green Road and Wordsworth Avenue, Sheffield, to serve the ever growing Parson Cross housing estate. Originally the land was occupied by farm buildings and was known locally as Toad Hole. The Ritz Cinema provided Sheffield with another fine large suburban cinema.

Architects were Hadfield & Cawkwell and the builders were W.G. Robson Ltd. Built in a modern style of red rustic brick, a prominent feature above the entrance doors and to each side of the façade are vertical concrete ribs which house glass brick windows between them, giving natural light to the balcony staircases, which lead off from each side of the entrance hall and also the first floor balcony foyer. The large auditorium tapers towards the large proscenium opening and while a wide stage was provided, there is no wing space, fly tower or dressing rooms, although during the Second World War occasional charity concerts were held. Seating was for 1,800 in stalls and balcony.

The Ritz Cinema opened on Monday 6th December 1937 with Bing Crosby in “Pennies From Heaven”. The original proprietors were Ritz Picture House (Sheffield) Ltd. and CinemaScope was installed in 1955. In 1961 the Ritz Cinema was sold to the Leeds based Star Cinema Group who closed the cinema for ‘contemporary modernisation’ with new carpets, seating, projectors and lighting being installed. The Ritz Cinema never showed films on a Sunday, but a Sunday bingo session was introduced in 1962 and on 7th November 1962 apart from the Saturday afternoon Children’s matinees, the Ritz Cinema became a full time Star Bingo Club.

From 17th May 1965, films returned on a part time basis on Mondays, Tuesdays, Wednesdays & Saturday evenings. Bingo continued on Sunday, Thursday & Friday evenings. The final film was shown on Wednesday 9th November 1966 - Kim Novak & Richard Johnson in “The Amorous Adventures Of Moll Flanders”, and the Ritz Cinema returned to being a full time Star Bingo Club, continuing for many years under EMI, Coral and finally David’s Place Ritz Bingo Club, which was certainly operating until 2001. In 2008, the former Ritz Cinema stood closed and boarded up. It was demolished in early-2013. The site remains an empty plot in September 2020.

It appears that this building was demolished earlier this year.

Found some pictures on tinternet,

the most beautiful cinema ever! and I have seen a few.If people of today could have seen it they would be gobsmacked.Why didnt the people of Sheffield preserve it! bit was one of a kind.

After Star, bingo operated by EMI, Coral and lastly as David’s Place-Ritz Bingo. I echo other’s in saying what a waste of a fine building. Alas, it’s position out of the city probably was a problem when subsequent uses were considered by planners.

I have just seen a video of the Ritzs demolition and it was heart breaking. Well never see the like again.