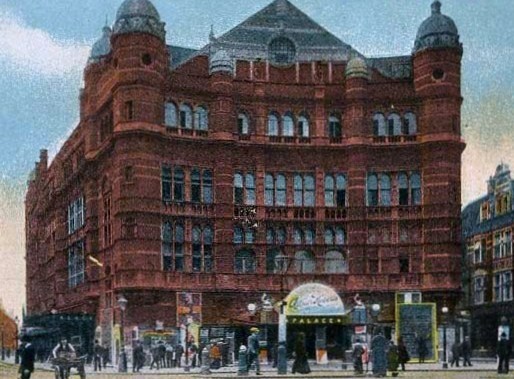 The Palace Theatre London opened on 31st January 1891 as the Royal English Opera House. It was the idea of, and built to the designs of the impressario Richard D'Oyly Carte (the man responsible for bringing together Gilbert & Sullivan) in consultation with architects Thomas Edward Collcutt and G.H. Holloway in association with architect and theatre consultant James George Buckle. Carte’s idea was to build an opera house to house home grown opera, especially the grand operas of Sir Arthur Sullivan, who tired of writing comic opera with W.S. Gilbert, wanted to write opera on a grander scale.

The English Opera House opened with Sullivan’s Grand Opera “Ivanhoe”. The theatre is a grand towering Victorian edifice, free standing with its entrance in Cambridge Circus, Charing Cross Road at the corner with Shaftesbury Avenue. It has a striking brick and terra cotta frontage in the early Spanish Renaissance style which was restored in 1987, and has three shallow bays filled with dozens of tiny arched windows with domes at each corner rising above the parapet. Inside, a beautiful marble foyer has staircases, also in marble, leading down to the stalls and up to the first circle. Both contain very ornate bar areas. The auditorium, with seating for 1,450, has ornate gold mouldings and mirrors with more marble features throughout with deeply projected balconies. For many years much of the ornate work was painted over in a plum coloured paint but during the last few years this has been scraped off to reveal the marble and Mexican onyx panels still in excellent condition.

Unfortunately, D'Oyly Carte’s dream of an English Opera House was short lived and following a season of French Drama in 1892 with actress Sarah Bernhardt performing, he sold the theatre to a company headed by Augustus Harris from the Theatre Royal Drury Lane. Its name was changed to The Palace Theatre Of Varieties. Harris also struggled with the theatre and in 1893 he sold it to Charles Morton and the theatre really took off as a music hall with all the great stars of the day playing there.

The Bioscope made its first appearance here during the variety shows mainly showing Royal events and travelogues. Alfred Butt took over in 1904 and in 1912 the Palace Theatre of Varieties played host to the first (and only truly) Royal Command Show. In 1920 Charles B. Cochrane took over the Palace Theatre and he initially ran it very successfully as a cinema. In 1922 Rudolph Valentino’s “The Four Hoursemen Of The Apocalypse” ran here for 22 weeks. Further films to be shown at the Palace were “Simba” in September 1928, “The Queens Necklace” in April 1930 & “Grand Hotel” from September-December 1932. “Gone With The Wind” played here concurrently with the Empire Theatre & Ritz Cinema in Leicester Square, from 22nd April to 9th June 1940. In 1957 a season of Soviet Films were shown here.

It was also used during the 1920’s & 1930’s during the daytime for cinema trade shows. The Palace Theatre then became very popular for revues and musicals. Fred Astaire made his last stage appearance here in 1933 in “The Gay Divorce” before going to Hollywood. It suffered some severe bomb damage during the Second World War but was reopened by 1940 for a revival of “Chu Chin Chow” - the big stage hit of the First World War.

During the run of “Song Of Norway” in 1946, the Palace Theatre was taken over by the two great showmen Tom Arnold & Emile Littler and the success of the theatre continued. Even Christmas pantomimes were staged here. Although mainly a musical house, the Palace Theatre did have a couple of plays staged in the late-1950’s, when Laurence Olivier starred in “The Entertainer” (a transfer from the Royal Court Theatre, Chelsea) in 1957, which was followed by Norman Wisdom in “Where’s Charly?”.

Nearly always a successful theatre, it did have a flop when Betty Grable appeared in “Diamond Horshoe”. This was followed by a successful run of “Flower Drum Song” in March 1960 and then “Cabaret”. In 1961 the Palace Theatre presented the London stage premiere of “The Sound Of Music” which went on to play for 2,385 performances. This was followed by the smash hit “Jesus Christ-Superstar” which ran for 3,328 performances. This record was surpassed when “Les Miserables” opened in 1985 and played at the Palace for a staggering 7,602 performances (19 years) before it moved down Shaftesbury Avenue to the Queens Theatre to continue its run.

In 1982 the Palace Theatre was taken over by Andrew Lloyd Webber' Really Useful Theatre Group and following the move of “Les Miserables”, the theatre was restored to much of its original splendour. The horrible plum paint was finally removed. In 2008 it became the home to “Spamalot”, the stage version of the film “Monty Python And The Holy Grail”, which was followed in 2009 by the London stage premiere of another hit film - “Priscilla, Queen Of The Desert”. In 2012 it was taken over by the London Theatres Co. Other recent musical staged here have been “Singing in the Rain” and “The Commitments”. In June 2016 “Harry Potter and the Cursed Child” opened.

The Palace Theatre is designated a Grade II* Listed building by English Heritage.

This video segment from the CBS Sunday Morning show says a film using the process Kinemacolor was screened for the first time at the Palace on February 26th, 1909:

The bottom of the page includes links to more Kinemacolor information.

The Doctor Who story “The Talons of Weng-Chiang” was filmed inside(and outside? this theatre building in 1977.