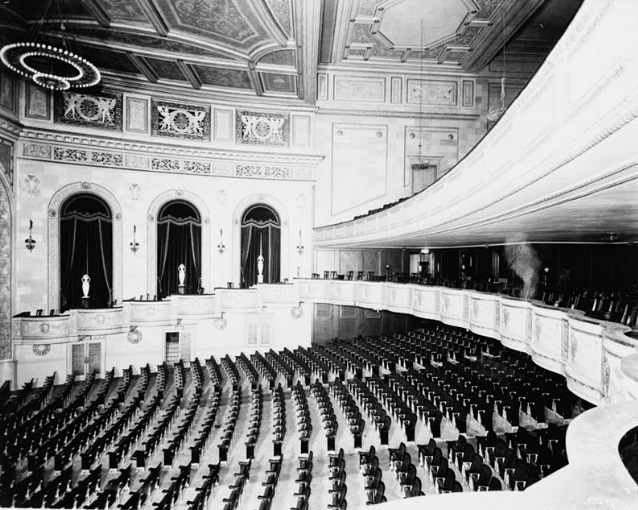 The Orchestra Hall opened on October 23 1919, and designed by the prodigious architect C. Howard Crane, the Detroit Symphony Orchestra Hall took just a little over four months to complete.

Built in stately Neo-Classical style, and highly ornate inside, the Orchestra Hall could seat nearly 2,300 in its accoustically superb auditorium.

Under the leadership of Ossip Gabrilowitsch, the DSO became one of the most prominent orchestras in the US during the 1920’s and 1930’s, appearing at the Chicago Century of Progress World’s Fair in 1933-4 (as the Ford Symphony) and heard weekly on the radio show "The Ford Symphony Hour" broadcast live from the Hall.

In 1939, the DSO was forced to leave their ornate hall due to financial struggles, and for the next half century would perform at the Masonic Temple, the Music Hall, and the Ford Auditorium.

In 1941, Symphony Hall was converted into a venue for both live entertainment and movies, as the Paradise Theatre, serving a mainly African-American audience. The Paradise Theatre hosted some of the biggest names in jazz of the 1940’s, such as Billy Holiday, Ella Fitzgerald, Duke Ellington and Count Basie.

For a decade, the Paradise Theatre drew enthusiastic crowds to see the big name stars play its stage, but it was closed in 1951.

It briefly was renamed the Town Theatre, and switched to movies-only. The theatre later served as a church and a recording studio for the DSO during the 1950’s, before closing in 1960.

In 1970, a restaurant chain was interested in razing the Hall, but it was fortunately saved, when the newly-formed Save Orchestra Hall, Inc. acquired the decaying building and began a 19 year-long program of restoring it to its 1920’s splendor.

In 1989, after a fifty year absence, the DSO returned to its former home.

In 1996 the DSO announced expansions to Music Hall, which were completed in 2003. The expansions also restored Music Hall, and it is now part of the Max M. Fisher Music Center.

This was Crane’s first theater he designed.

There are pictures of Detroit Orchestra Hall/Paradise Theater here, (which may have been originally pointed to in some of the earlier now dead links): View link

Here is an illustrated article about Orchestra Hall in the August, 1920, issue of the professional journal Architecture. There are two photos, plus floor plans of four levels of the theater (scroll down.) There is also one photo of C. Howard Crane’s Grand Theatre in Pittsburgh. There are several additional photos of Orchestra Hall beginning on this page.

The pictures can be resized using the + and- buttons in the toolbar at lower right. Whatever size you chose can be downloaded using the usual right click and save commands. That’s useful when the pictures are displayed sideways, as they sometimes are.