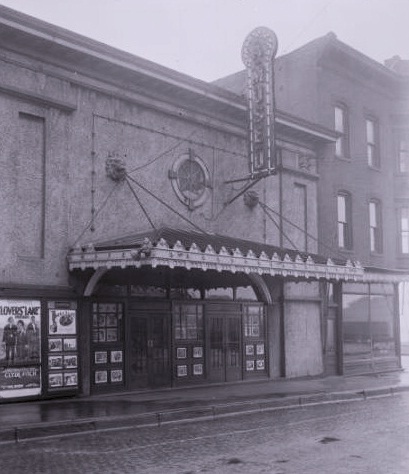 An article about long-time Muscatine exhibitor Ludy Bosten, published in the April 9, 1962, issue of Boxoffice Magazine, says that he opened his first theater in Muscatine, a nickelodeon called the Princess (later renamed the Gayety) in 1912, and that “several years later” he opened the A-Muse-U Theater.

Bosten was interviewed for the article, and reminisced about the early days of the A-Muse-U, telling the interviewer of the ten-piece orchestra, and how on Sundays people would come from as far away as Cedar Rapids to attend the shows, and all the theater’s 543 seats would be filled.

Maybe when Bosten said he opened the A-Muse-U several years after opening the Princess in 1912, he meant that he took over the existing theater, as I’m sure Mr. Richman was not a time traveller, and could not have written, in a book published in 1911, about a theater not yet built.

That Bosten performed some alteration of the building and then reopened it is a possibility, of course, as Richman says the house was given over to moving pictures exclusively, and Bosten said he presented live acts as well as movies at his A-Muse-U. Richman also gives a bigger seating capacity (600) than Bosten does (543), suggesting that some of the seats might have been removed to make room for a stage.

Boxoffice Magazine has mentions of the A-Muse-U in various issues, the last as late as November 20, 1954, when it said that the house had been reopened after having been closed for some unspecified length of time.

Forgot to mention this: The October 16, 1948, issue of Boxoffice said the A-Muse-U had been completely remodeled and redecorated, with a new facade and marquee, new screen and alterations to the stage, an expanded balcony and new stairway, and new carpets.

Excerpts of items published in the Centennial edition of the Muscatine Journal & News-Tribune, May 31, 1940, includes this information about the A-Muse-U Theatre:

“The A-Muse-U theater was first opened by E. M. Henle in 1908, in a new building erected by Adam Van Dresky at 103 Sycamore street.

“Later Mr. Neipert dropped out of the business, and Mr. Bosten continued to run the A-Muse-U until October of 1931, when he sold out to C. J. Jamison, the present proprietor.”

This description of the A-Muse-U Theatre from History of Muscatine County, Iowa, by Irving Berdine Richman, was published in 1911, and says that the A-Muse-U opened in February that year, contradicting the 1940 Journal & News-Tribune article I cited in my previous comment which said it opened in 1908:

“The A-Muse-U is a theater given over exclusively to high-class motion pictures. The building, on Sycamore, between Second and Front streets, was opened in February, 1911. This place of amusement has scarcely a rival for beauty and convenience in the country. The front is pleasingly designed in stucco and the interior decorations and accessories are modern and entirely to the tastes and comforts of patrons. 600 people can be seated in the opera chairs and face a spacious stage.”

The book notes that Muscatine then had three other movie theaters, plus the Family Theatre presenting vaudeville and movies, and the Grand Opera House for stage productions and concerts. 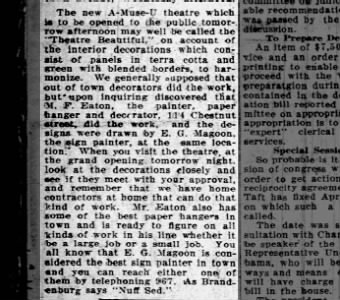 1956 was the last listing found by the Musser Public Library.