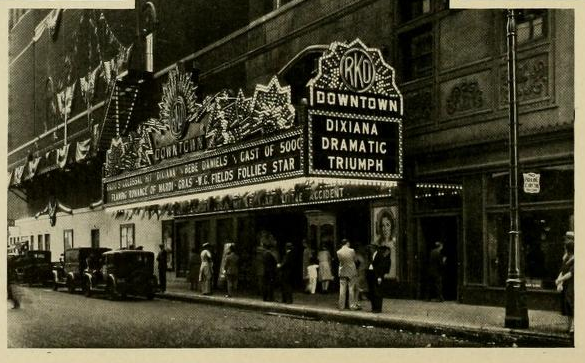 Opened as the Oriental Theatre, this movie palace was the only Atmospheric style theatre ever built in downtown Detroit, opening on September 26, 1927. It had a Middle Eastern theme to its décor, and originally seated 2,950. It was designed by Percival R. Pereira, his only theatre built in the downtown area.

The opening day movie was called “Blood Ship” starring Hobart Bosworth, and despite its title, was an adventure and not a horror movie! The theatre had a house orchestra in its early years, led by Frank Museal. It was equipped with a 3 manual 15 ranks Kimball organ. For many years the house organist was Dudley Boomhower.

The Downtown Theatre was closed in 1950, having last been operated by the Chicago-based H & E Balaban chain. Three years later, the theatre was demolished (except for the former lobby area, now a restaurant) to make way for a parking lot, which was later built on as housing. Its crystal chandeliers were removed and now hang in the lobby of Detroit’s Redford Theatre.

From the map function a theatre is clearly visible sitting on Park & Adams. Is this the former RKO Downtown, or another house?

On a current map the RKO Downtown would be seen as a parking lot. The Adams Theater is near the corner on Adams Avenue, and the United Artists in on Bagley somewhat near the corner next to a gravel lot that used to contain the Tuller Hotel.

DETROIT-Detroit’s off-again-on-again house, the Downtown, reported closed last week, reopened here Saturday. The house was closed by Lipton Astrachan, who went back to Chicago, but reopened by Sam Carver, who was manager of the house for the Krim circuit when it was open a few weeks ago.

Some 2010 pictures of surviving bits of the lobby about halfway down this page.

Percival Pereira was not a member of the firm of Pereira & Pereira. That firm consisted of brothers William and Hal Pereira. There is a lot of conflation of Percival and Hal on the Internet, and I suspect that much of it has been spread from Cinema Treasures. I really ought to have noticed this sooner.

The former lobby is now home of an Asian restaurant called Pao. The rest of the building is apartments.

The name of the RKO Downtown changed to the Downtown in 1936. The RKO Downtown temporarily closed after the Wednesday, May 20, 1936 screening of the musical “Dancing Pirate”. The theater reopened as the Downtown on Friday, October 16, 1936 with the drama “The President’s Mystery” and the comedy “Sitting on the Moon”. (From the Detroit Free Press archives of Newspapers.com)