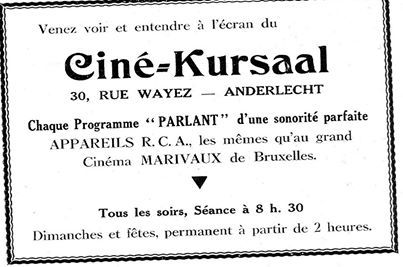 This was the earliest cinema to be opened in the Anderlecht district in 1910. Since the 1930’s it was part of the Soudan circuit, like the later Metro Cinema in the same Rue Wayez. In 1952 “Gone With the Wind” was shown, also “Scaramouche” with Stewart Granger.

It was revived in 1971 and was the first cinema in Anderlecht to be equipped for CinemaScope. It closed in 1975 to become a retail shop. Demolished in the 1980’s, a retail shop was built which today is operated by by Morrocan immigrants.