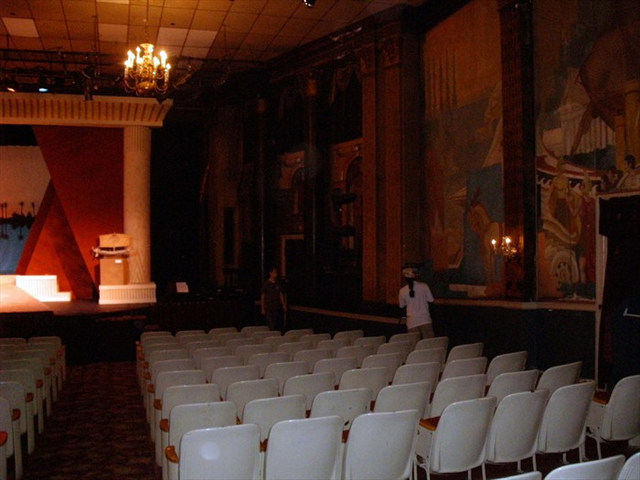 Actually located in Haddon Township, but listed as being in Oaklyn. Opened in 1927 with 600 seats, the Ritz Theatre was a popular downtown cinema before it went into a period of decline in the 1970’s when it became a venue for adult movies.

When videocassettes became more popular, it spelled the end for many adult theaters, including the Ritz Theatre, which closed in the mid-1980’s.

A local theater company, "Puttin' on the Ritz Inc.", (now the Ritz Theatre Company) began leasing the Ritz Theatre in 1985 and has used the historic movie house as a venue for live theater ever since.

The group purchased the 400-seat Ritz Theatre and restored and renovated the building.

Restorations included the facade of the building and the interior murals, as well as adding seats in the auditorium. The Greek Revival-style Ritz has also been added to the National Register of Historic Places.

I guess this theater is haunted:
View link

Listed as a Budco Theatre in the 1985 International Motion Picture Almanac.

Listed in the 1970 FDY as part of William Goldman Theatres, Inc.

Looks like a nice cozy little theatre. I wish the owners success.

The Haddon Township Historical Society has a page of pictures and history about the Ritz Thetare. The link is: View link The historical society web site also mentions that the Ritz will be the location for a film about a closed cross-town theatre — The historic Westmont Theatre. Brent J. Donaway’s documentary film The Grand Old Lady (Footprint Films)is going to premiere at the Ritz Thetare on May 6, 2007. Info is from a flyer located at www.myspace.com/TheWestmontTheatre I think it is really cool that one local historic theatre, the Ritz, will be the premiere location for a film about another local theatre.

Revenues have dropped, so the Ritz will present a fund-raising show on April 5. Philly.com story here.