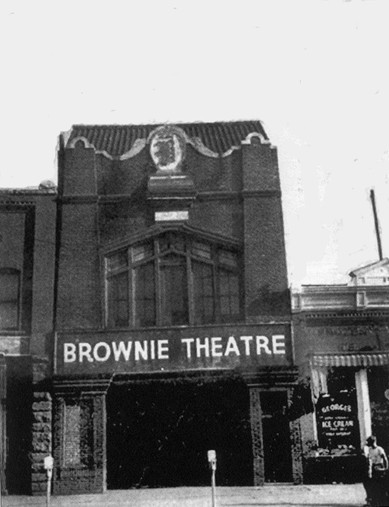 The Brownie Theatre played many B movie westerns, serials and shorts, and continued to operate until at least 1950.

The September 23, 1950, issue of Boxoffice mentioned the Brownie Theatre. It said that Bob Dean had taken over management of the Manring and Brownie theater from Vic Wintle.

A March 22, 1941, item says “Phoenix Amusement Company, which has long been operating Schine’s Manring and Brownie theatres here under lease arrangements, has acquired the buildings housing the theatres from Charles Otto Brown.”

Phoenix was probably the local operating company set up by Schine.

My guess would be that C.O. Brown had named the Brownie Theatre after himself. The Middlesboro Cemetery has Brown, Charles Otto listed, 02/06/1889-10/21/1942. Assuming it’s the same Charles Otto Brown, given his age there’s no telling how long he was in the theater business at Middlesboro. The Brownie might have been a very old theater.

This is probably nothing to do with the Brownie, but at the far left in this photo of Middlesboro, which looks to be from the early 1960s, could that be a fragment of a theater marquee, or is it just a rather theatrical shop marquee?

The marquee referenced in your picture belongs to the Manring Theater. It is now gone as of the middle 70’s.

The July 1, 1916, issue of The Moving Picture World had an item that was probably about this theater:

“Middlesboro, Ky. — The Brown Amusement Company has let contracts to R. L. Brown, of Middlesboro, for the construction of the new theater building to be used as a combined theater and business block. R. F. Graf & Son, of Knoxville, Tenn., are the architects. Prices have been asked on seats, indirect fixtures, four art doors, etc. The house will cost about $15,000.”

This photo of the Brownie Theatre shows a two-story building with a separate door for upstairs offices, and it’s about the right size to have cost $15,000 in 1916.

The Brownie Theatre address was 1918 Cumberland Avenue in Middlesboro launching on November 25, 1916. It replaced the Amuzu Theatre that had a five-year lease in another location from 1911 through November 9, 1916. (The Amuzu was refitted as a restaurant.)