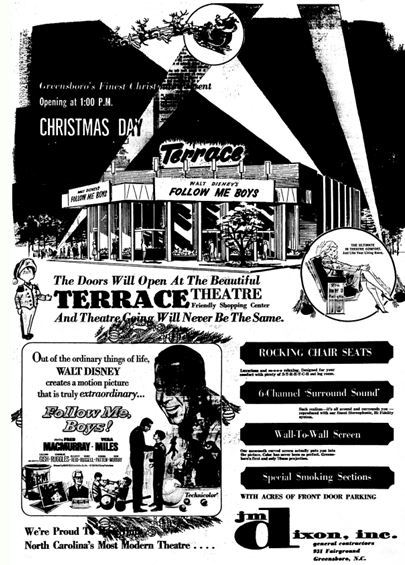 It was known as “Greensboro’s Finest Christmas Present” and “Piedmont’s first Ultravision Theatre” when the Terrace Theatre opened on December 25, 1966 with Fred McMurray in “Follow Me Boys”. Located in the Friendly Center Shopping Center which was Greensboro’s largest and most popular shopping destinations in the state. The opening of the Terrace Theatre was a modern showplace that offered a new magnificence in motion picture entertainment and all of Greensboro and surrounding areas within the Triad loving it. The theatre offered a lot of modern features with full rocking chair seats (it had a seating capacity of 750 with special reserved sections), and six-channel stereophonic surround sound and a 180-degree Ultravision screen that was capable of showing bigger presentations.

By 1986, the original auditorium of 750 seats was split down the middle giving 375 seats each, becoming a quad screen cinema under Cineplex Odeon/Plitt Southern. By 1988 two more auditoriums were added with seating for 280 in each when Janus Theatres acquired the Terrace Theatres from Cineplex Odeon. By the late-1990’s Consolidated Theatres built a 12-screen multiplex Cinema on the opposite side of the Friendly Center. It was newer and flashier, with all stadium seating and digital sound. The Terrace Theatres was then reduced to showing second-run films and bame a discount house under Janus Theatres.

By 1981,the second auditorium was split into two sections adding 300 seats each when it was the TERRACE THEATRES 1-2-3 under Plitt Southern.

You’re absolutely right Chuck about the calculations. The original auditorium with 750 seats wasn’t chopped up until 1986. I saw THE EMPIRE STRIKES BACK in 70mm there with its huge auditorium and widescreen vision!!

By 2000,the Terrace was reduced to showing second-run films and became a discount dollar house when the Greensboro Grande Cinemas opened. It closed in 2000 not 2001. Was demolished in 2002 to make room for the expansion of the Friendly Center. This will be revised.

The TERRACE 1 & 2 THEATRES opened on March 1,1974 with the Greensboro showing of “THE EXORCIST”.

During the mid-1960’s and part of the early 1970’s,the TERRACE THEATRE at Friendly Center was Greensboro’s showplace for a lot of the reserved seat engagements that got the first-run Triad exclusive showings with its full 180-degree Ultravision screening and spectacular 70MM projection and 6 Channel Stereophonic Sound. The reserved seat engagements that played first-run at Greensboro’s TERRACE THEATRE were “The Sound of Music”, “Gone With The Wind”,“The Sand Pebbles”, “Oliver!” and “The Lion In Winter”,and “Ice Station Zebra”,along with “Paint Your Wagon”.

The exclusive engagement showing of “2001:A Space Odyssey” and “Star!” played here as well as “Far From The Madding Crowd”,“Alfred The Great”,and “Ryan’s Daughter” were 70MM general release engagements. Not to mention the first-run showing of “The Song of Norway” too.

Yes Chuck…. “GONE WITH THE WIND” during its run at the TERRACE was re-release in 1967-1968 as reserved seat engagements that presented it in 70MM and 6 Channel Stereophonic Sound

raysson you are definitely correct about the Empire Strikes Back. I saw it there as well during release in 70mm (although I didn’t realize at the time). The lines were incredible, and they had decorated the theater with “Hoth” murals painted along the windows.

When the Terrace opened, it spelled the doom of the downtown National theatre in 1966. Wilby-Kincey was not allowed to have a monopoly and so the National had to go.