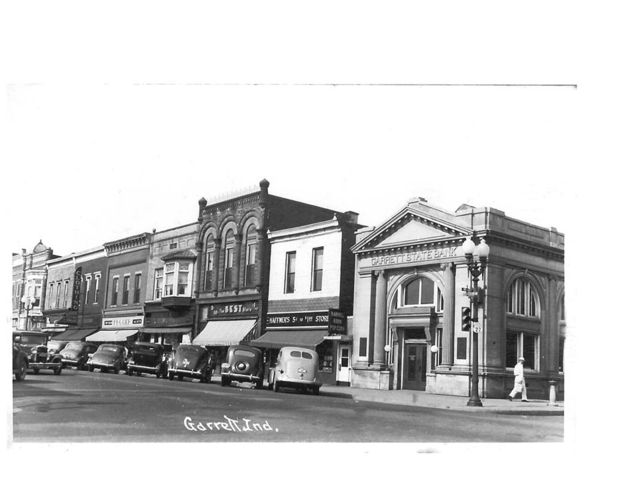 The Royal Theatre opened in 1913. In 1921 it was rebuilt to the plans of architect Alvin M. Strauss and reopened March 16, 1921 as the New Royal Theatre. It had 450 seats. I it was remodeled on August 4, 1930. In 1932, the theatre’s owners installed sound equipment. The theatre was still operating in 1951. Today, there is an office building on the site housing an insurance agency.

A New Royal Theatre was formally opened on March 16, 1921, according to the following day’s issue of the Garrett Clipper. The new house had 500 seats, and the March 15 issue of the Fort Wayne News and Sentinel said that the 500-seat theater rapidly nearing completion on Randolph Street in Garrett had been designed by architect A. M. Strauss.

For the first couple of years the house advertised itself as the New Royal Theatre. I’ve been unable to discover if the New Royal was on the same site as the original Royal, or (if it was) it incorporated any of the original theater’s structure.

1930s photo added credit Willennar Genealogy Center: A Service of Eckhart Public Library. The building to the left of the vertical clothing store sign would have housed the Royal Theatre. Current street view confirms this, with the 3 lots to the left of the bay window, now comprising the 120 S. Randolph Street address.