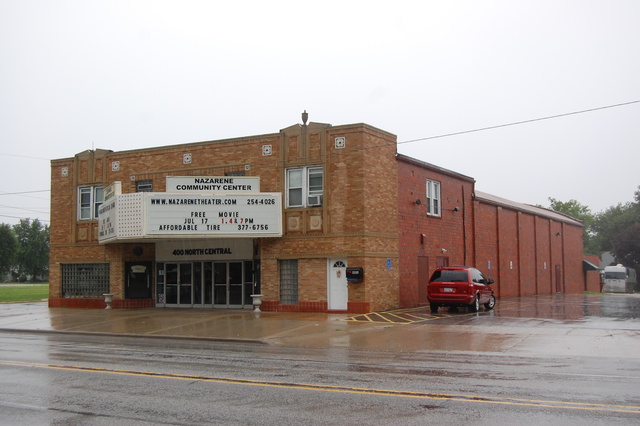 The Roxana Theatre was opened on September 1, 1941 with Bing Crosby & Bob Hope in “Road to Singapore”. Although the Roxana Theatre survived a tornado in 1949 (which tore the roof off the building), competition ultimately proved to be a far greater threat.

The theatre, which had been charging $2.50 per ticket, was no longer turning a profit.

The Roxana Cine is now used as a community center owned by a next-door church and presents live performances.

This theatar is now owned by a church which is next door and is used for plays, dinner theaters and such.

The theatre was once used for live shows early in its life. The backstage area still had evidence of this in the early 1980’s. The theatre also had an apartment upstairs where the early owners lived. This apartment had a viwing room where the shows could be watched from behind a window. I believe the theatre sat around 450 people in the early 80’s. It was a nice old place with many interesting features not found in modern theatres.

The Roxana Theater will reopen Sundayâ€"and thereby will culminate a long, hard and successful fight against discouragement by Mr. and Mrs., Albert Critchlow, owners and operators of the motion-picture theater. Last May 21, when a tornado struck Wood River and a section of Roxana, the theater was badly damaged. The roof was blown off, and the theater was extensively damaged otherwise. Mr. and Mrs. Critchlow started as soon as possible on the job of rebuilding the theater. Delays now and then were discouraging, but they persevered. A new roof was constructed, other damage was repaired.

While the work was under way, Mr. and Mrs. Critchlow decided to add improvements to their popular theater. A new lounge has been added, and other alterations made. The theater has been completely redecorated. The result is that, the spacious Roxana is among the most beautiful and commoditious (sic) theaters in this section.

The reopening has been set for 1 p.m. Sunday. Programmed is a double featureâ€"Clark Gable and Alex Smith in “Any Number Can Play” and Loretta Young and Van Johnson in “Mother Is a Freshman.” Mr, and Mrs. Critchlow formerly operated the Temple Theater in Alton. They opened the Roxana Theater on Sept. 1, 1940, and operated continuously until last May, when the tornado struck.

A 1949 Boxoffice item about the post-tornado repairs to the house said that, prior to opening the Roxana, Mr. and Mrs. Critchlow had operated the Temple Theatre in Alton, Illinois.

The Roxana Theatre originally opened on September 1, 1941 with “The Road to Singapore,” “Shooting High,” a cartoon and various short subjects.