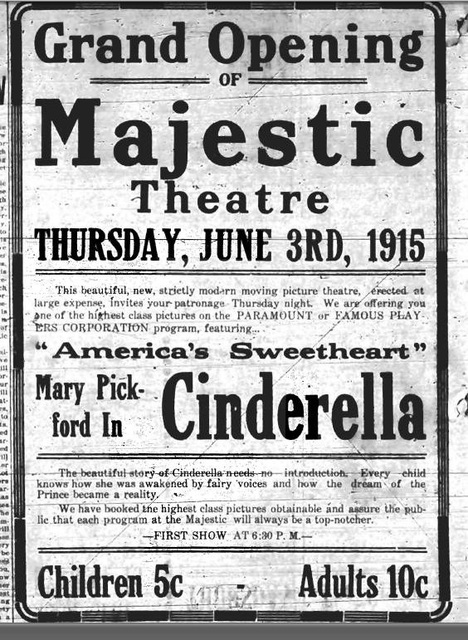 The Majestic Theatre opened June 3, 1915. Around 1935 it was renamed Athena Theatre and by 1941 it was operated by the Schine Circuit. Eventually it was the only remaining movie house in the city of Athens, Ohio until recently, when the Athena Grand multiplex opened.

The theatre reopened in February 2002 after a $2 million renovation paid for by Ohio University which bought the theatre in 2001 for $600,000.

Its recent restoration has recaptured its 1930’s heyday, and the theatre’s new programming is eclectic mixing independent, foreign, classic, and, occassionally, first-run commercial fare for the college town.

Gee thanks! I forgot that i had asked the question. This is just about the most stunning small town theater marquee ever. And the photo is the jewel of my Schine collection.

Thanks for the updated photo, Lost Memory. No contest, hunh?

When I arrived in Athens in the Fall of 1988, the Athena had just suffered a fire — started, if I remember correctly, by the popcorn machine. Later on, a few of the undergrads got permission to salvage the print of the movie they had been showing, Rambo III, which had ended up dumped on the floor of the projection room. They cleaned it up and we screened it in the School of Film’s sound mixing theater.

At that time, the town had no theaters, as the Varsity across the street was in the process of being turned into the world’s largest Taco Bell.

The Athena reopened in 1990. I remember seeing Die Hard 2 upstairs in one of the theater’s two converted balcony screening rooms, and Cyrano de Bergerac downstairs as part of the Athens Film & Video Festival.

By the way, the description above is no longer correct. Athens now has a multiplex called the Athena Grand located out on State Street.

Don – I think Mr. Butler still has that print :)

As for the Athena, it reopened under Ohio University management in September. Dr. Ruth Bradley and I run the place and we’re programming a mix of contemporary art films and classics from around the world. It will again host the 2009 Athens International Film and Video Festival in April as it has for decades.

Chris, please tell Ruth that Don Solosan said hello. I met my ex-wife in a class she taught at U of Michigan, and the fact that Ruth moved down to Athens was a big reason why we looked at Ohio U and ended up applying there.

Glad to hear that the Athens Film & Video Festival is still going strong.

Chris, Could you please contact me through my email link? I am looking at theaters which have been purchased by colleges or universities. Thanks. Karen

I was involved in providing the updated projection & sound equipment for the two previous owners. Once when the 1300 seat theatre was trisected & once again after the popcorn machine fire! Installed “DOLBY” Digital Audio in Balcony Screening Room.

Remember Court St. being closed to allow the helicopter hoist of the HVAC Roof top units. Stationary crane did not have adequate reach!

This theatre opened June 3, 1915 as the Majestic Theatre. The information is located on the Athena Cinema Website.